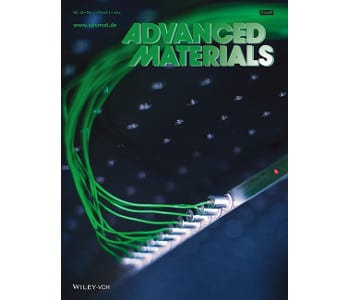 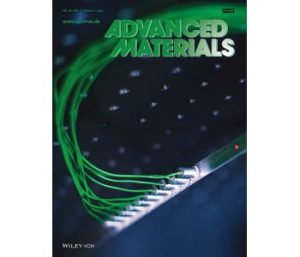 Working model of the programmable material, shown on the cover of Advanced Materials, issue March 5th, 2014.

Researchers from Empa and ETH Zurich have succeeded in producing a prototype of a vibration-damping material that could change the world of mechanics forever. The material of the future is not only able to damp vibrations completely; it can also specifically conduct certain frequencies further.

Although the “programmable material” still only works in a one-dimensional model construction, it has already demonstrated it unusual capabilities: The research project entitled “Phononic Crystal with Adaptive Connectivity” has just been published in the journal Advanced Materials. The first step towards mechanical components with freely programmable properties has thus been achieved.

The working model used by the researchers consists of a one-meter by one-centimeter aluminum plate that is one millimeter thick. This sheet-metal strip can vibrate at different frequencies. In order to control the wave propagation, ten small aluminum cylinders (7 mm thick, 1 cm high) are attached to the metal. Between the sheet and the cylinders sit piezo discs, which can be stimulated electronically and change their thickness in a flash. This ultimately enables the team headed by project supervisor Andrea Bergamini to control exactly whether and how waves are allowed to propagate in the sheet-metal strip. The aluminum strip thus turns into a so-called adaptive phononic crystal – a material with adaptable properties.

Adaptation in fractions of a second

The piezo controls can now be set in such a way that waves are able to propagate through the sheet-metal strip “perfectly normally”, i.e. as though no aluminum cylinders were attached to it. Another configuration enables a certain frequency spectrum of the waves to be absorbed. And this muffling is variable as the piezo elements can alter their elastic properties electronically in fractions of a second – from low to high stiffness. Bergamini explains what could develop from the research results: “Imagine you produce a sheet of metal, imprinted with an electronic circuit and small piezo elements at regular intervals. This sheet metal could be programmed electronically to block a certain vibration frequency. The interesting thing is that even if you cut off part of the sheet, the waves in the cropped section would largely spread in the same way as in the initial piece.” This method could be used on three-dimensional components.

Such a “metamaterial” could fundamentally revolutionize mechanical engineering and plant construction. Until now, the vibration properties were already determined in the selection of material and the geometry of the part. In future, the material could react to current vibration readings and adapt its vibration properties at lightning speed.

During the Phononic Crystal with Adaptive Connectivity research project, Empa-researcher Bergamini collaborated with Paolo Ermanni’s group at ETH Zurich and Massimo Ruzzene from Georgia Institute of Technology. In a follow-up project, the programmability of the prototype is to be expanded: “Until now, every piezo element has reacted to vibrations alone, independent of its neighbor,” explains Bergamini. “As the next step, we want to interconnect the elements with each other to be able to control them jointly or in a coordinated fashion.”