The NITEC reaction is explored with tetrazole-functionalised microparticles, and demonstrates micrometer-scale resolution as a surface-patterning technique.

Polymeric microparticles are particularly attractive for healthcare applications, but diagnosis and therapy require a high degree of selectivity for effective targeting and the minimisation of side-effects. The functionalisation of these particles must therefore be precisely controllable.

Light-induced chemical reactions can offer the required level of three-dimensional (spatial) precision, as well as offering exact control over the reaction time.

Reaction solutions tend to be somewhat opaque, so photochemical reactions are required to be extremely efficient under mild conditions. One candidate already proving itself in this area is the nitrile imine-mediated tetrazole-ene cycloaddition (NITEC) reaction. It proceeds via the UV-activation of tetrazole, which releases N2 to create nitrile imine dipoles that react readily with alkenes, thiols, and acids.

Such functional moieties are not stable during the free-radical polymerisations typically used to generate polymeric microparticles, requiring complex multistep protection procedures and restrictions on the type of polymers produced by this method.

To avoid these problems, researchers collaborating between the USA and Germany have developed a step-growth procedure using non-stoichiometric initial conditions, allowing them more freedom regarding the polymer backbone and providing sufficient leftover functional groups for the subsequent functionalisation of their particles. 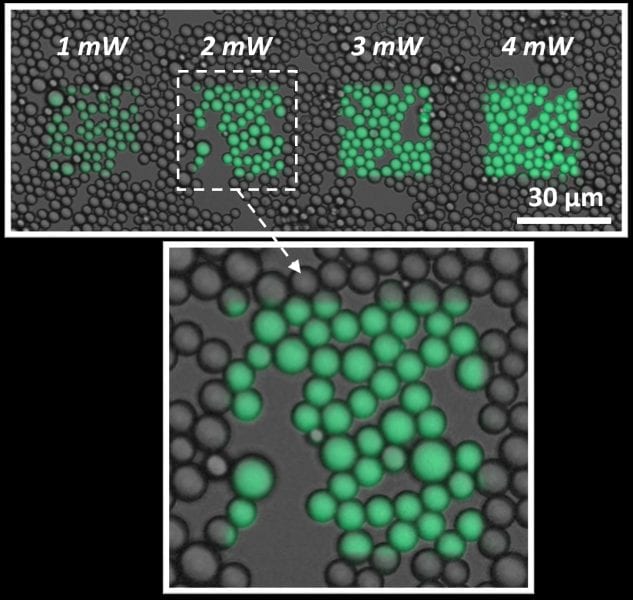 They use tetrazole-functionalised microparticles to study NITEC reactions with alkenes, exploring this reaction for post-polymerisation particle functionalization. For particles with a diameter of roughly 4 micrometres, they reach full conversion within just ten minutes of UV exposure, and find that the reaction kinetics are independent of the particle concentration. Stored samples showed no conversion without exposure, even after several months.

Monolayers of microparticles with fluorescent moieties were then dried onto glass slides and a two-photon laser writing technique was used to demonstrate the micrometer-scale resolution of the NITEC reaction as a surface-patterning technique. The image here shows the clear spatial precision of this method.

These researchers also explore the possibility of exploiting this reaction as part of a controlled release system. Check out the details now in Advanced Functional Materials.