Researchers at Rice University have found a way to kill some diseased cells and treat others in the same sample at the same time. 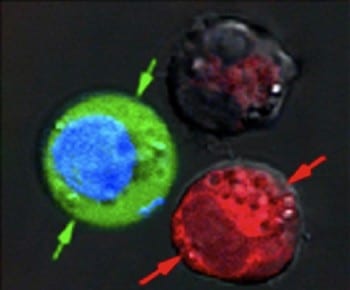 After the laser pulse, red-stained cells show evidence of massive damage from exploding nanobubbles, while blue-stained cells remained intact, but with green fluorescent dye pulled in from the outside. Image courtesy Plasmonic Nanobubble Lab/Rice University.

Researchers at Rice University have found a way to kill some diseased cells and treat others in the same sample at the same time. The process activated by a pulse of laser light leaves neighboring healthy cells untouched.

The unique use for tunable plasmonic nanobubbles developed in the Rice lab of Dmitri Lapotko shows promise to replace several difficult processes now used to treat cancer patients, among others, with a fast, simple, multifunctional procedure.

The research is the focus of a paper published online in ACS Nano and was carried out at Rice by Lapotko, research scientist and lead author Ekaterina Lukianova-Hleb and undergraduate student Martin Matonga, with assistance from the Center for Cell and Gene Therapy at Baylor College of Medicine (BCM), Texas Children’s Hospital and the University of Texas MD Anderson Cancer Center.

Plasmonic nanobubbles that are 10,000 times smaller than a human hair cause tiny explosions. The bubbles form around plasmonicgold nanoparticles that heat up when excited by an outside energy source – in this case, a short laser pulse – and vaporize a thin layer of liquid near the particle’s surface. The vapor bubble quickly expands and collapses. Lapotko and his colleagues had already found that plasmonic nanobubbles kill cancer cells by literally exploding them without damage to healthy neighbors, a process that showed much higher precision and selectivity compared with those mediated by gold nanoparticles alone, he said.

The new project takes that remarkable ability a few steps further. A series of experiments proved a single laser pulse creates large plasmonic nanobubbles around hollow gold nanoshells, and these large nanobubbles selectively destroy unwanted cells. The same laser pulse creates smaller nanobubbles around solid gold nanospheres that punch a tiny, temporary pore in the wall of a cell and create an inbound nanojet that rapidly “injects” drugs or genes into the other cells.

After suspending the cells together in a green fluorescent dye, they fired a single wide laser pulse at the combined sample, washed the green stain out and checked the cells under a microscope. The red cells with the hollow nanoshells were blasted apart by large plasmonic nanobubbles. The blue cells were intact, but green-stained liquid from outside had been pulled into the cells where smaller plasmonic nanobubbles around the solid gold nanoparticles temporarily pried open the walls.

Because all of this happens in a fraction of a second, as many as 10 billion cells per minute could be selectively processed in a flow-through system like that under development at Rice, said Lapotko, a faculty fellow in biochemistry and cell biology and in physics and astronomy. That has potential to advance cell and gene therapy and bone marrow transplantation, he said.

Most disease-fighting cell and gene therapies require “ex vivo” – outside the body – processing of human cell grafts to eliminate unwanted (like cancerous) cells and to genetically modify other cells to increase their therapeutic efficiency, Lapotko said. “Current cell processing is often slow, expensive and labor intensive and suffers from high cell losses and poor selectivity. Ideally both elimination and transfection (the introduction of materials into cells) should be highly efficient, selective, fast and safe.”

Plasmonic nanobubble technology promises “a method of doing multiple things to a cell population at the same time,” said Malcolm Brenner, a professor of medicine and of pediatrics at BCM and director of BCM’s Center for Cell and Gene Therapy, who collaborates with the Rice team. “For example, if I want to put something into a stem cell to make it turn into another type of cell, and at the same time kill surrounding cells that have the potential to do harm when they go back into a patient — or into another patient — these very tunable plasmonic nanobubbles have the potential to do that.”

The long-term objective of a collaborative effort among Rice, BCM, Texas Children’s Hospital and MD Anderson is to improve the outcome for patients with diseases whose treatment requires ex vivo cell processing, Lapotko said.

Lapotko plans to build a prototype of the technology with an eye toward testing with human cells in the near future. “We’d like for this to be a universal platform for cell and gene therapy and for stem cell transplantation,” he said.