A membrane that can lift 20 times its own weight when it comes into contact with a solvent vapour has been developed by a German/Chinese team. 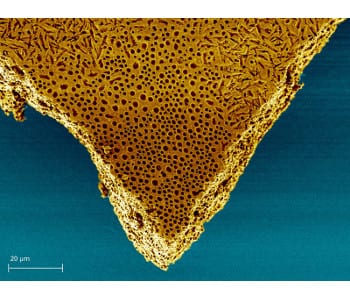 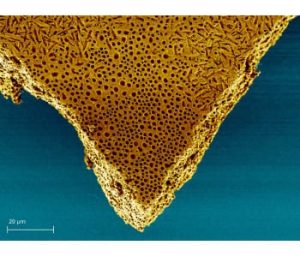 A team of researchers from Germany and China has developed an artificial skin with unexpected properties. The group has produced a membrane that curls very quickly when it comes into contact with the vapour from organic solvents like acetone. Using this actuator membrane, they can imitate biological structures which respond to an external stimulus like the Venus flytrap or the lids of the ice plant seed capsule. Their actuator is particularly close to the biological models because the scientists applied design principles to it for the first time that had not previously been used by materials scientists for such systems: first, they designed the membrane in such a way that the top is hard and the material below it gradually becomes softer; and, second, the foil is interspersed with pores which ensure that the solvent can gain rapid access to the membrane. Hence it responds faster to the external stimulus than other actuators. Such materials can be used as artificial skin and muscle in robots and are also suitable for use as sensors.

While plants do not have muscles, many of them are nevertheless quite dynamic. For example, the lids of the ice plant seed capsules open up when they become wet; that is, when conditions that will enable the seeds to thrive prevail. As soon as the capsules dry out, the lid closes again. The plant has this ingenious capsule lid structure to thank for its prospects of successful reproduction. Unlike the top, the bottom of the capsule can absorb water and swells as a result. The wet lids then open up and fold over again if they become dry. The biomimetic actuator developed by the research team working with Jiayin Yuan, a research group leader at the Max Planck Institute of Colloids and Interfaces, functions in a very similar way.

“Our membrane reacts to the external stimulus a good ten times faster than previous polymer actuators”, says Yuan. “Moreover, its movement is bigger.” The membrane exerts a force that enables it to lift around 20 times its own weight. And it even functions almost perfectly when the scientists put it through its paces: first, they cool the material to minus 190 degrees Celsius for two hours using liquid nitrogen, then they heat it up for an entire day to plus 200 degrees Celsius and, finally, they subject it to pressures of one tonne per square centimetre. Although the membrane loses some of its reaction speed during this rigorous workout, it still works better than all comparable polymer actuators that move when they come into contact with a liquid.

Graduated cross-linking and pores make all the difference.

Materials scientists already adopt different approaches to developing biomimetic actuators that behave like biological models. However, up until now they had not succeeded in coming close to the natural model. As with the mechanical components of plants, the structure of the material is what makes the difference here. “Our membrane has a gradient, that is a slope, in its level of cross-connection and is also porous,” says Jiayin Yuan. “Thanks to these two structural features, our actuator responds quickly and with a big movement.” Up to now, such actuators consisted of two layers which absorb different amounts of liquid. This kind of material combination can only carry out relatively small movements and is also slow. Many of these systems are very complicated to produce and some of them fail when they become too hot or dry.

The researchers obtained their particularly effective membrane actuator by first generating a membrane from an ionic polymer in a corresponding solution. Voluminous pillar molecules, which have potential connection points to the ionic polymers, were incorporated into this foil. The researchers then connected the molecular pillars and chains using an ammonia solution, which activates the connection points of the pillars. The trick here is that the ammonia solution is only given access to the membrane from one side as it lies on a plate. Hence the solution only trickles slowly into the foil from above. As a result, it connects strongly with the components on the upper side but with decreasing intensity the deeper the solution penetrates the membrane. Moreover, the aqueous ammonia has an additional effect; it also leaves the pores behind in the foil.

The vapour from the solvent, for example acetone, spreads rapidly via the pores through the membrane. However, the actuator’s organic fuel does not do very much on the top, which is strongly cross-connected and hard. As it penetrates to the bottom, however, its activity increases: it swells the ionic polymer, and thereby the membrane bends.

The membrane can also distinguish between different solvents.

Such actuators can be useful in all applications in which a material must respond to an external stimulus by moving. For example, it could provide both artificial skin and muscle for robots. Its particular attraction lies in the fact that no extra energy would have to be expended for the movement. This would be provided instead by the stimulus itself.

The researchers were struck by another rather unexpected application for the membrane while they were testing different solvents for fuelling their actuator: “The membrane reacted in a very characteristic way to each solvent that we used – both in terms of the force of the movement and the reaction time,” explains Yuan. “So it is also very suitable for use as a sensor that can differentiate between different organic solvents.”

The researchers at the Max Planck institute in Potsdam now aim to develop their material further. They are working on an actuator that is activated not by a solvent but by light. Here too, Jiayin Yuan sees just one of the opportunities offered by his research object: “We want to show that polyionic liquids enable applications that are inconceivable using other materials.”