From Polyoxometalates to Transition Metal Dichalcogenides 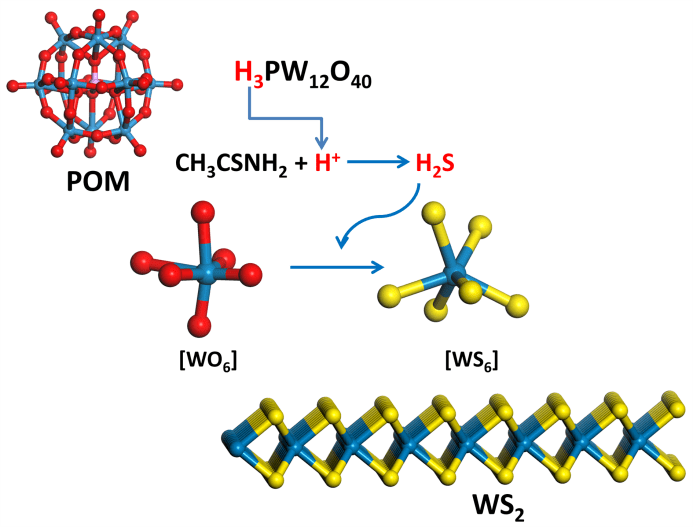 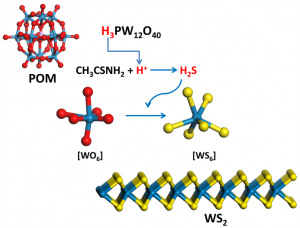 rapid development in graphene and the special characteristics of graphene, such as the absence of a bandgap, have led to a search for other two-dimensional (2D) nanomaterials of inorganic analogues. In particular, transition metal dichalcogenides (TMDs, such as MoS2, WS2 and MoSe2) with lamellar structures have attracted tremendous attention owing to their similar structure to graphite and sizable bandgaps. TMDs have wide application in lubrication, catalysis, energy storage, and photovoltaics. The most promising route for the large-scale production of TMDs is solution-phase methods, due to the simplicity of bulk production. However, until now, most of the existing solution-phase methods also required high temperatures to obtain a well-crystallized structure.

In a recent paper at ChemNanoMat, Xun Wang et al. recently reported the synthesis of hierarchical TMDs with novel structures (WS2 rods, MoS2 rods, and MoSe2 hollow spheres) at temperatures below 200 oC by using polyoxometalates (POMs) as tungsten or molybdenum precursors. The work demonstrates that the obtained hierarchical structures were formed through self-assembly of the corresponding single-layer nanosheets and that the POMs are prerequisite for the formation of hierarchical TMDs at a lower temperature. The hydrogen ion and [PO4]3- group played important roles in the formation of the hierachical TMDs. This method could potentially be expanded to other POMs for the synthesis of more hierarchical TMDs at low temperature. In addition, the epitaxial growth of noble metal nanoparticles on WS2 and MoS2 rods was achieved and the obtained Pt/WS2 and Pt/MoS2 hybrids were highly active and durable HER catalysts.

This article is part of a special issue on Nanomaterials for Energy Conversion and Storage in ChemNanoMat ((link to: www.chemnanomat.org)). Click here ((link to: http://onlinelibrary.wiley.com/doi/10.1002/cnma.v2.7/issuetoc)) to see the other articles in the issue.

Whiskey-Phase Exfoliation: A Golden Future for Electronics?
Replacing toxins with water in the green production of plastics
Affordable seismic dampers for residential and commercial buildings
A pair of micro-pliers grown on hair-sized optical fibers