Polymer wrinkles with a purpose

Researchers have found that the wavelength of polymer wrinkles relates to their mechanical properties, a discovery with applications for material synthesis. 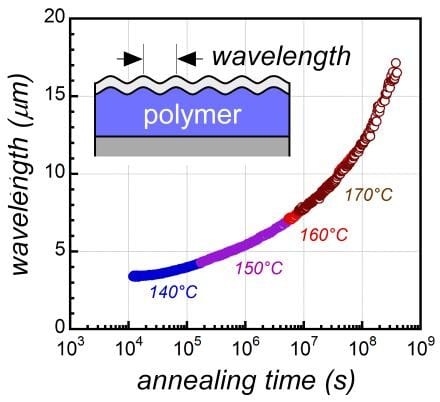 Wrinkles. On human skin, they’re indicators of age, stress, and sun damage, among a multitude of other things. But for polymer composite films, wrinkles can give researchers a quantitative way of determining key mechanical properties. Writing now in the Journal of Polymer Science: Polymer Physics, Edwin Chan, Qinghuang Lin, and Christopher Stafford measure the elasticity and viscosity of the films by simply studying how the wrinkles change over time and with temperature changes. The work has potential applications wherever wrinkles need to be suppressed.

When polymer composite films attached to a surface are heated they expand, until eventually, at a particular temperature, wrinkles develop. When making microchips, such wrinkling in photoresist films is problematic, says Chan. After seeing Chan’s previous work on polystyrene films, a collaborator at IBM who works on photoresist technology became interested in its implications for the company’s work. “So we started our collaboration on studying how to prevent wrinkling in photoresists during heat treatments,” says Chan. In this work, the researchers study polyhydroxystyrene (PHS), a common photoresist material used in microelectronic applications.

By heating PHS films, they find both the depth and wavelength of the wrinkles that form over time, and relate the values to the film’s mechanical properties, such as the elasticity and viscosity of the films. Using this understanding, the researchers hope to be able to suppress the wrinkling in photoresist processing in the microchip industry. “Many of the current contributions to the field of wrinkling are on how to adapt them for surface property control,” says Chan. “In our work, we are trying to suppress them, in the hope of eliminating them completely.”

And when most people think of suppressing wrinkles, human skin naturally comes to mind. A long-term goal of Chan’s is “translating what we know about wrinkling of viscoelastic materials to beauty care, i.e. suppressing wrinkles on our skin.” Since skin is also considered to be a composite material, made up of many layers with different mechanical properties, Chan says the idea is not farfetched. The next Fountain of Youth? Stay tuned!