A microscopic pump starts up when irradiated with UV light but its material continues to work when the stimulus is removed. 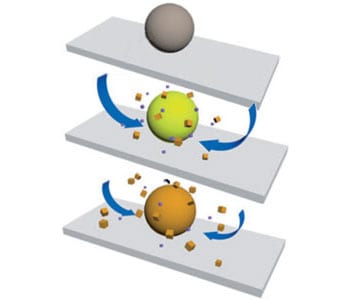 Miniaturization is constantly on the march. For example, we now have entire analytical and diagnostic systems that can take place on a chip. These systems require miniaturized versions of macroscopic components and devices. American researchers have now introduced a microscopic pump, it is based on polymer gel microparticles and starts up when irradiated with UV light. The extraordinary thing about this device is that the material continues to pump when the stimulus is removed.

Building an autoinductive, self-propagating reaction directly into a polymer has resulted in stimuliresponsive materials that are capable of remembering the presence of a stimulus, even after the stimulus is no longer present. As a proof of concept, a nonmechanical, polymer-based pump has been made that is capable of pumping fluids surrounding the polymer when exposed to a fleeting signal (UV light). Source: Wiley-VCH

“Intelligent” polymer materials that can “respond” to an external stimulus with a macroscopic function are the subjects of intensive research. The fact that this material “remembers” the initiating stimulus – the UV light – and continues to pump when it is switched off is something completely new for this type of material. The new material requires no reagents or “fuels” to be added through the liquid. It functions autonomously, converting chemical energy into a mechanical response, the flow of liquid. Molecule 1 receives the signal; the fluoride ions transmit it. This is the first time that all these properties have been combined in an “intelligent” polymeric material.

It should also be possible to devise a similar material that reacts to stimuli other than light, such as the presence of a certain substance. Such microscopic pumps could be used to redirect the flow in a microfluidic system as soon as this specific substance appears.