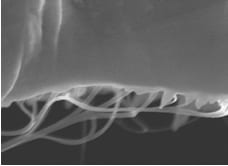 A remarkable strengthening effect has been observed in SWCNT/polymer composites. However, up until now it has been difficult to fabricate SWCNT/metal composites with effective load transfer capacity because of the agglomeration of the SWCNTs in the matrix and the poor interfacial bonding between SWCNT and the metal matrix in the traditional powder-metallurgy processes. 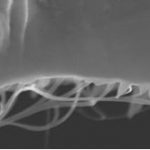 SEM image of the fracture edge of a laminated nanocomposite.

This situation has now been changed by work from a team led by Sishen Xie and Weiya Zhou at the Institute of Physics, Chinese Academy of Sciences. They report a simple, easy and effective method to fabricate Cu/SWCNT/Cu sandwich-type laminated nanocomposites by means of electrodeposition using a freestanding SWCNT film with continuous reticulate structure as template. In the Cu/SWCNT/Cu laminated nanocomposites, not only can the SWCNT film keep continuous reticulate structure, but the orientation of SWCNTs can also be controlled. The continuous reticulate architecture of the SWCNT film and the strong interfacial strength between the SWCNT and Cu matrix result in an effective load-transfer capacity of the SWCNT bundles in the laminated nanocomposites. The estimated Young’s modulus of the SWCNT bundles in the composite are in a range of 860-960 GPa. Such high load-transfer efficiency leads to the extremely high mechanical strength of the laminated composites. 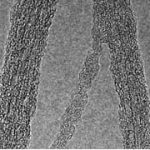 TEM image of the SWCNT pullout at the fracture edge.