Researchers have developed a new system using galinstan liquid metal and nanoparticles, in what could be a major development for flexible and self-repairing electronics. 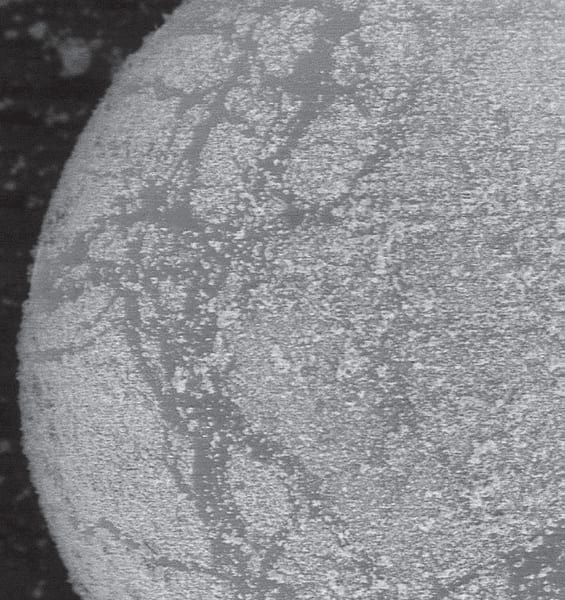 Imagine a flexible electronic circuit with stretchable interconnects, reconfigurable wires, and extendable antennas, which could also heal itself in response to being damaged. It sounds far-fetched, but this type of circuit has taken another step towards reality, according new results on liquid metal marbles by Professor Kourosh Kalantar-zadeh and co-workers.

In this study, droplets of the liquid metal galinstan (a eutectic alloy made up of gallium, indium, and tin) were covered with insulating metal oxide nanoparticles such as tungsten oxide (WOx).  The researchers then investigated the properties of these coated metal droplets by measuring the contact angle, splitting and fusing the droplets by applying a force, and observing their dynamic properties during free fall and impact with a solid surface.

As seen in the videos below, the simple addition of the oxide nanoparticles to the surface results in a dramatic difference in behavior.  This then also changes the way these droplets behave in electrical contact, and it could open up new uses for liquid metal in electronic circuits.

As a proof of concept, the authors fabricated a sensitive electrochemical detector for heavy metal ions, such as cadmium and lead, in aqueous solution using the liquid metal marbles as the active component.  The new possible applications of these liquid metal marbles are only limited by the imagination, and as long as the scientists continue to play, we can expect continued discoveries, and one day, we may wonder how we ever lived without liquid electronic circuits.

Free fall of a droplet of liquid metal galinstan and its contact with a solid surface.

Free fall of a droplet of liquid metal galinstan that has been covered in oxide nanoparticles and its subsequent contact with a solid surface.