Plasmonic transducer can measure motion on the nanoscale

Researchers confine plasmons in a resonant cavity only 20 nanometers wide to precisely measure mechanical motion smaller than the size of an atom. 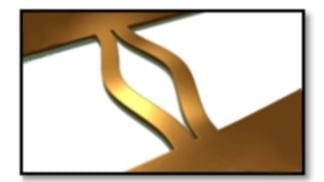 Researchers at FOM Institute AMOLF in Amsterdam and EPFL in Lausanne have developed a new way to measure tiny displacements with light. By confining plasmons in a resonant cavity that is only 20 nanometers wide, they could precisely measure mechanical motion smaller than the size of an atom.

The researchers fabricated a structure reminiscent of human vocal cords, but scaled down 1000 times. They created two long “bridges” of gold-coated silicon nitride, with a length of 20 micrometers and a thickness of 120 nanometers, separated by a narrow air gap of only 20 nanometers. Where vocal cords generate a vibration in the air between them, these nano-vocal cords generate a modulation in the intensity of the light trapped in the cavity between the bridges. A highly sensitive measurement technique allows the researchers to detect minute mechanical vibrations of the nano-bridges with very high sensitivity.

In conventional materials light cannot be confined to length scales smaller than approximately 200 nanometers, due to the “diffraction limit”. The researchers avoid this limit by converting the light to surface plasmons: a special type of light waves that are bound to the surface of a metal. The key feature of the nanostructure in this work is the use of these plasmons to read out the mechanical motion of the nanostructure. As the plasmons are confined to the nanoscale, they are efficiently affected by even small motion of the tiny vocal cords. By monitoring the plasmons’ transmission, the intrinsic thermal (“Brownian”) motion of the cavity can be detected. The amplitude of this motion is only 10 picometers, smaller than an atom.

With this result, the researchers show for the first time coupling between plasmons and mechanical motion. They also show that the mechanical motion can itself be influenced by changing the light intensity. This new plasmonic transducer can find application in ultra-sensitive nanoscale sensors. The extremely small light cavities should allow vibrations with very high frequencies (up to GHz range) to be detected.