Researchers use molecular imprinting to develop a highly sensitive and selective nanorod biosensor with artificial antibodies. 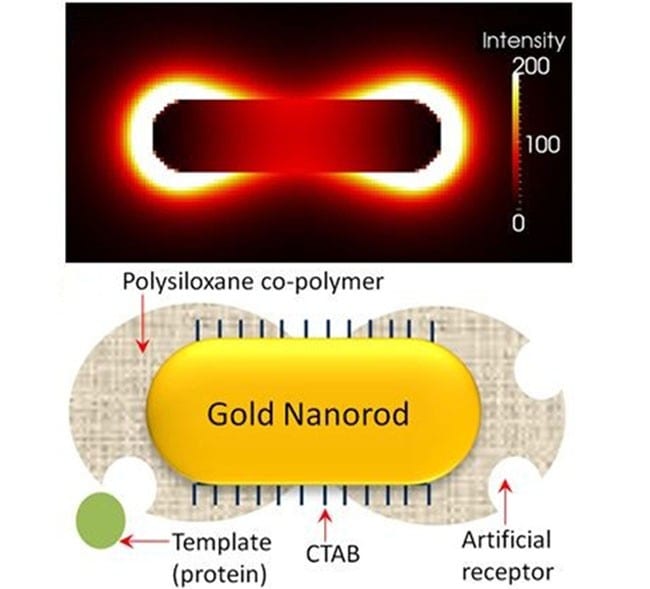 The use of localized surface plasmon resonance (SPR) as a platform in biological sensing holds immense promise in delivering devices with superior sensitivity to those of competing technologies. Until now, a major drawback has been that the production of plasmonic biosensors required the use of natural antibodies, making the process expensive and time-consuming. An important step toward overcoming this problem has recently been made, with researchers at Washington University reporting a novel plasmonic biosensor with ‘artificial’ antibodies.

The biosensor developed is based on very small changes in the SPR spectrum of gold nanorods upon selective binding of a target biomolecule (binding changes the refractive index surrounding the nanorod and thereby shifts the plasmon band). In order to achieve high selectivity, the researchers used the method of macromolecular imprinting to incorporate target species—as a proof-of-concept, several different proteins were used—into a polymer network in close vicinity (several nanometers) to the nanorod. Removal of the target leaves behind a cavity in the polymer, which acts as a ‘lock and key’ receptor enabling selective binding of the analyte. 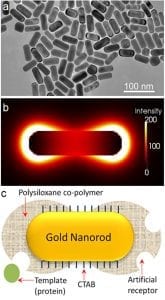 a) TEM image of gold nanorods; b) electric field distribution at the extinction maximum of the longitudinal SPR band; and c) illustration of imprinted nanorod with siloxane copolymer preferentially grown at the ends.

In order to attain maximal sensitivity, it is imperative that the polymer and the molecularly imprinted species are concentrated at the ends of the nanorod. This requirement owes to the fact that the electric field surrounding the nanorod is nonuniform, with the longitudinal resonance being stronger and more sensitive than the transverse (the electric field distribution of the longitudinal resonance is shown in figure panel (b)). This was achieved with the help of a surfactant (CTAB), which is known to adsorb preferentially at the sides of the nanorod. Specific chemicals employed to form a bridge between the nanorod and the polymer precursors were then able to interact preferentially with thiol groups on the ends of the nanorod due to the lower surfactant concentration. The result after polymerisation: a peanut shaped polymer-nanorod with the majority of the polymer and reversible template inclusions (i.e., artificial antibodies) at the ends where the SPR is most sensitivly affected by analyte binding (see figure panel (c)).

To demonstrate the viability of their biosensor in a real-world system, the researchers successfully detected recombinant human neutrophil gelatinase-associated lipocalin (NGAL), a urinary biomarker of acute kidney injury, with detection limits lower than those of conventional analytical techniques. Although emulating the performance of natural antibodies does remain a challenge, the authors suggest ways this could be achieved, meaning we are likely to hear a lot more about these novel biosensors in the near future.

3D Printing Electronics Using a Multi-Material Approach
From the Wiley archives: Preparing for emergencies
The Promise and Challenges of Nanomedicines in Fighting Cancer
The best model for understanding illnesses in newborns