Plasma-Treated Water as a Superior Electrolyte 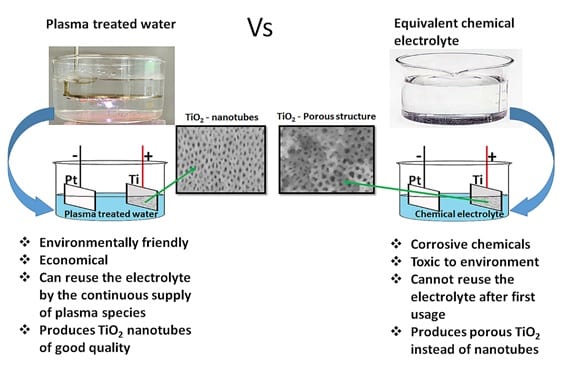 Plasma electrochemistry has been used extensively as an environmental friendly method for the fabrication of nanomaterials, as it does not involve the use of any toxic stabilizing or reducing agents. In new research, a comparative study was performed by anodizing Ti in plasma treated water containing either HNO3 and/or H2O2, and comparing this to the anodization in equivalent chemical solutions made with aqueous H2O2 and/or nitric acid (HNO3). Presented is an environmentally friendly electrolyte for the synthesis of titanium dioxide nanotubes by anodization. 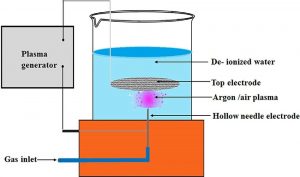 Schematic of the needle-to-plate set-up to generate plasma

Good quality titanium dioxide nanotubes have been synthesised using plasma-treated de-ionized water for the anodization of titanium. The key reactive plasma species, the nitrate and hydrogen peroxide produced by a nanosecond pulsed plasma in water, facilitate the oxidation-dissolution processes during anodization to form the quality titanium dioxide nanotubes.

Dr. Arun T. Ambujakshan and others of the Institute for Frontier Materials in Australia compared TiO2 nanotubes produced by anodizing titanium metal in either chemical electrolytes, prepared by adding nitric acid and/or hydrogen peroxide to water, to those made in an electrolyte made by plasma-treating water that contained similar concentrations of reactive species. This showed that argon plasma produced hydrogen peroxide in water that enhanced the formation of a more porous oxide layer, while the chemical aqueous hydrogen peroxide produced only a non-porous nanostructured oxide layer of titanium dioxide. 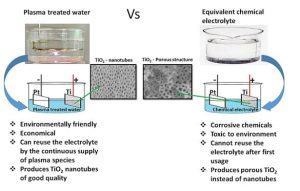