Demoted from her tenure track position in the mid 90s, Katalin Karikó persisted with her research into RNA therapeutics and is now senior vice president of BioNtech. 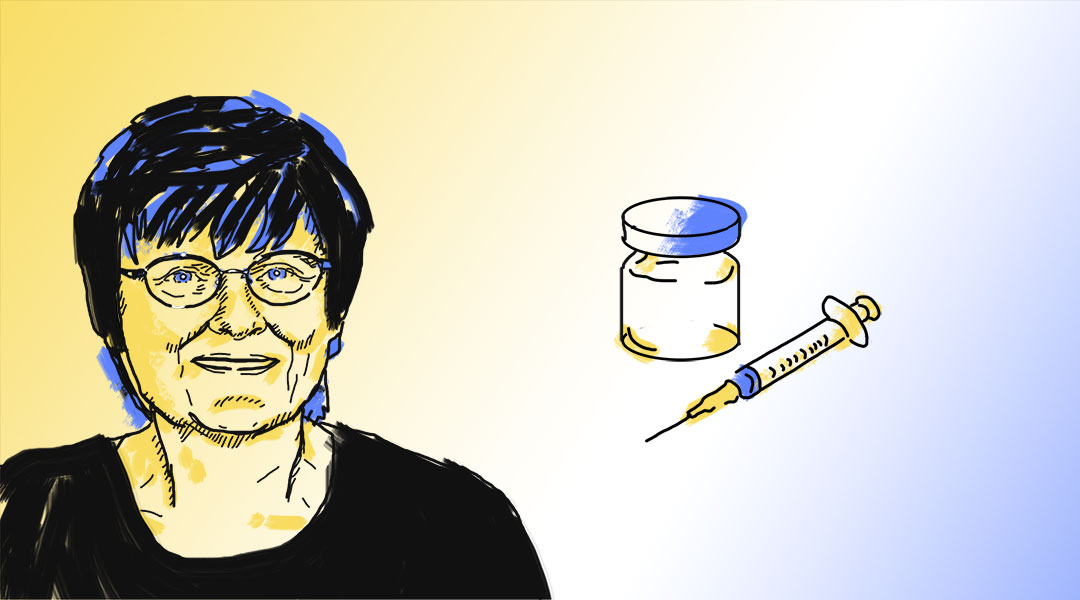 Katalin Karikó was born on January 17, 1955, and grew up in the Hungarian town of Kisújszállás. She attended the university of Szeged, where in 1976 she attended a lecture on the possible therapeutic applications of mRNA, setting the stage for the focus of her scientific career.

In 1976, the medicinal potential for mRNA was just beginning to be imagined. The existence of this biomolecule had only been established 15 years earlier, and the scientific community was working toward a detailed understanding of its natural function.

At the time, it was understood that mRNA acted as a messenger (hence the “m”) that delivered genetic code from DNA to the biological machinery for producing proteins. The subtler details of this process were, and are still today, being better clarified.

An understanding of the basic details of mRNA’s natural function is all that is required to dream about its therapeutic potential. If mRNA coding for disease-related proteins could be delivered to human cells, those cells would become little protein factories. The immune system would then develop defenses against those proteins, and be able to recognize and destroy the real disease.

Against the backdrop of this basic idea Karikó began her post-graduate studies in Szeged. She worked with Professor Jenö Tomasz to test the antiviral effects of bespoke synthetic RNA.

In 1985, she moved to the USA with her husband and two-year-old daughter to begin working at Temple University in Philadelphia. While at Temple she worked with double-stranded RNA, investigating its impact on patients with AIDS, hematological diseases and chronic fatigue.

In 1990 she was offered a tenure track position at the University of Pennsylvania. Around this time, a different group of researchers developed a technique for injecting mice with RNA in such a way that those mice started to produce the proteins encoded by the RNA.

Developing an analogous technique for humans was still a long way off. In 1990 it was known that naked RNA, when injected into humans, caused a rapid immune system response. This response destroyed the RNA long before it could reach cells and start protein production.

The first step to understanding how to get around this problem was to figure out which part of the structure of RNA caused the immune response. Without an answer to this question, the development of RNA therapeutics was stopped dead in its tracks.

After six years of work at the University of Pennsylvania, due in part to a lack of interest from funding agencies in supporting her work, Karikó was demoted from her tenure track position. This type of demotion generally leads to the end of a scientific career. In the same year, she was treated for cancer and her husband encountered a visa problem, leaving him temporarily stuck in Hungary.

On a reduced salary and with no prospect of being able to attract students to help with her research, she persisted, and eventually met a collaborator who was able to help further her work. The immunologist Drew Weissman moved to the University of Pennsylvania in 1997, and found himself fighting for photocopy time with Karikó.

They started to collaborate and developed a novel hypothesis that relied on one of the oldest known immune responses. In natural systems, RNA does not look like it is drawn in textbooks. Different organisms “decorate” their RNA, adding chemical modifications which act as a fingerprint. Bacteria can use these patterns of chemical decoration to identify which DNA belong to themselves, and which DNA are foreign and should be destroyed.

Karikó and Weismann wondered if perhaps a similar process was being played out in the human immune response to external RNA. To test this theory they chemically modified a selection of the building blocks that make up RNA. They incorporated these decorated RNA building blocks into larger strands of the biomolecule and observed the response after exposing them to immune cells.

Today, Karikó is a senior vice president of BioNtech, one of the companies involved in the SARS-CoV-2 vaccine effort. She accepted this position in 2013, after the University of Pennsylvania refused to reinstate her to a tenure track position. She helps direct the company’s portfolio of RNA-based research which expands far beyond viral vaccines. For example, the company recently published work looking at a vaccine for multiple sclerosis.

The field of RNA therapeutics that Katalin Karikó helped to found is having a massive impact on the world today, only 16 years after her key discovery. This field is still in its infancy, and the full impact of her determination and sheer force of will is a long way from being realized.