No formal scientific education, a single mother, author of 103 scientific papers, the first person to see a corona virus, June Almeida was a tour de force. 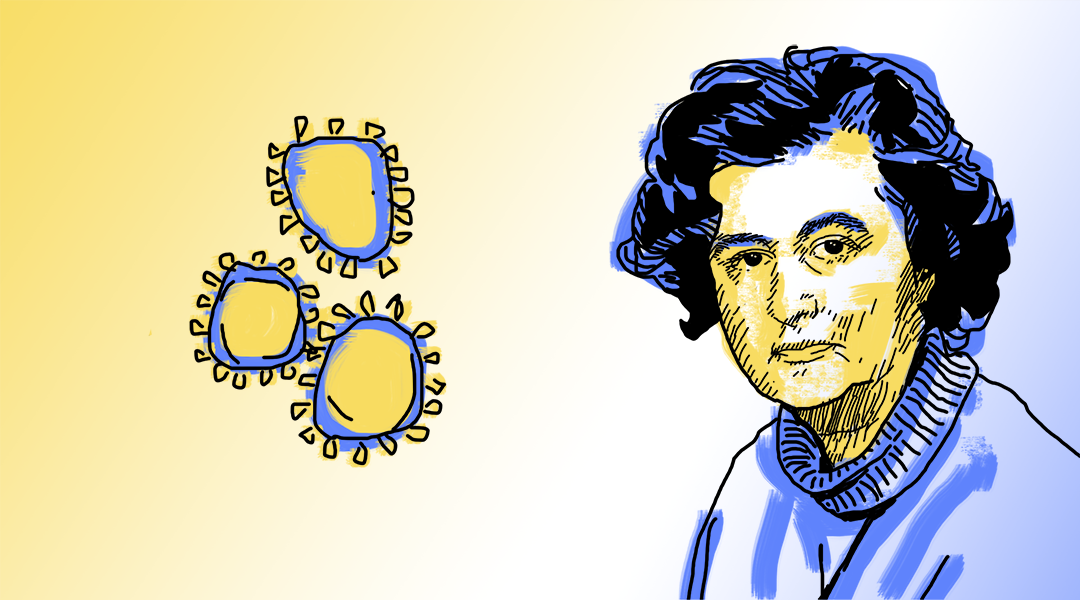 The relationship between the structure and function is not one that needs much thought in everyday life. Most chairs have a number of legs and a flatish section somewhere, but the mechanics of how this arrangement provides a place to sit are not something I personally spend much time pondering.

It seems comically self-evident to suggest that structure plays a massive role in how objects function. But bear with me while I go for a bit of walk with a strained metaphor. Take a bicycle. Two wheels are attached to ball bearings, which in turn attach to a frame, which carries handlebars and a seat. These elements come together to allow the bicycle to be ridden.

Now, imagine that you’re an alien who for reasons… let’s say quantum entanglement, is unable to directly touch a bicycle.  If you wanted to understand what the bicycle was for, one of the key parts of that puzzle would be a detailed description of its appearance.

If the alien wanted to learn how to stop the bike from functioning effectively, this accurate picture of the bicycle might help them develop the thumb tack.

In order to stop a virus or bacteria from carrying out its function, grasping its structure is no less important. During June Almeida’s professional life she worked tirelessly to shed light on the structures of diseases so that their function could be better understood.

Born June Hart to a working-class family in Scotland, her father earned a living by driving a bus. She attended Whitehill Senior Secondary School where she performed excellently from an academic perspective, and was awarded Whitehill School’s science prize.

She dreamed of going to university, but since her family did not have the means to pay for such an education she left school at 16 and started an entry-level lab technician role in histopathology at the Glasgow Royal Infirmary.

When her family moved to London in 1952 she got a job at St. Bartholomew’s Hospital in London as a laboratory technician. Here in London she met the Venezuelan artist Henry Almeida. They were married in 1954 and soon afterwards moved to Canada to enhance their professional prospects.

June started working at the Ontario Cancer Institute, Toronto, as an electron microscopy technician, and found that in Canada her lack of a formal education was less of a barrier to career progression than it was in the UK. Almeida was promoted rapidly to the position of junior scientist, and was encouraged to start publishing her own independent research.  She started appearing in academic papers in 1960, and by 1962 she had published several manuscripts as lead author.

Also while in Canada, she gave birth to a daughter, Joyce.

Her work gradually gained traction in the field, and in 1964 she was offered a job back in London at St. Thomas’ Hospital Medical School. She and Henry moved back to London, but Henry quickly decided that he would prefer to live in Canada, leaving June in London as a single mother. The couple divorced in 1967.

In the same year she was appointed a research fellow in the Department of Virology at Hammersmith Postgraduate Medical School.

Joyce Almeida said in an interview with WhatIsBiotechnology that at the time the family didn’t have much money, but that her grandparents were living in the suburbs of London, and were able to help take care of her.

In 1970 June rose to become a senior lecturer at Hammersmith, and only then in 1971 was she awarded a D.Sc. (Doctor of Science) degree, on the basis of her publications. In 1972, she moved to the Wellcome Research Laboratories in Beckenham, Kent, and started working on viral diagnostics and vaccine development.

In 1982, she married Phillip Gardner, a clinical virologist. When Gardner was forced to retire early in 1984 due to ill health, Almeida retired with him and the two moved to the seaside town of Bexhill.

When her career ended in 1984, she had published 103 academic articles, and her images had appeared in many more textbooks and high impact journals.

After her retirement, she continued to act as an adviser at Wellcome, started a small business in the antiques trade, and qualified as a yoga instructor.

In Almeida’s first role at the Glasgow Royal Infirmary, she was working with a simple optical microscope.  In histopathology, microscopes are used to examine cells or tissue. Diagnoses can sometimes be made based on these observations.

She continued to do this type of work in London, but when she moved to Canada she began to work with electron microscopes.  Electron microscopes work via a fundamentally different mechanism to optical microscopes, and are able to achieve magnification of up to 7000 times.

When Almeida began work in electron microscopy, two academics in the UK had recently published their work on a technique called negative staining.  This technique involved the addition of a dye containing a heavy metal (potassium phosphotungstate) to experimental samples.

When employed correctly, this technique stains the background of the sample, but not the biological matter that the experimentalist is interested in, allowing the biological structure of interest to be visualized. In a 1993 interview Almeida said that negative staining “allowed the electron microscope to become one of the fastest and most efficient means of identifying a virus”.

In the phosphotungstic night,

What immortal hand or eye,

In the late fifties, Almeida developed her prowess for this technique as part of research looking at the link between various types of cancer and viruses. With her skills in this field established, she began looking for ways to improve the resolution of her images  She found an answer, in a technique developed for looking at the tobacco mosaic virus. A 1941 study looking at the structure of this virus used antibodies to clump together virus particles, making them easier to visualize through electron microscopy. Almeida reasoned that combining this technique with negative staining would provide higher resolution images than those that were possible before.

She found very quickly that this combination improved the resolution of the images to the extent that they no longer needed to be fully purified before staining. Visualizing viruses in situ meant that they were much less likely to be damaged during the preparation protocol, streamlining the entire process.

It was this pioneering work, and almost definitely her penchant for poetry [citation needed] that brought her to the attention of Tony Waterson, the chair of microbiology at St. Thomas’ Hospital Medical School in London. After accepting his offer to go back to the UK, she continued to apply this technique to countless projects.

The vast number of structures that Almeida helped to visualize over the course of her career makes a full summary more of a project for a book. Rather than detailing each of these, her work on hepatitis B can perhaps serve as an example of the kinds of scientific developments that her work enabled.

The first description of the symptoms of hepatitis B was recorded in 1885 in Bremen. An outbreak of smallpox had occurred there, and 1200 shipyard workers were vaccinated with lymph from other people. Around 200 of those workers later developed jaundice. It was speculated at the time that the vaccinations were responsible for the mystery disease.

1966, Baruch Blumberg observed what he termed the “Australian antigen”, in the blood of indigenous patients. At first it was thought that this antigen might be a genetic marker for leukemia. In 1968 an American virologist discovered a similar antigen in the blood of patients with hepatitis B. At the time, scientists were not sure whether this antigen had any role to play in the disease.

Around the same time, a virologist named David Dane, isolated the Australia antigen from blood samples of hemophilia patients who were suffering from jaundice. He also isolated a different antigen in the blood and noticed the presence of unusual lipid membranes, which he hypothesized were hiding the infectious core of hepatitis B.

He sent his blood samples over to Almeida and her team. They were able to dissolve the membrane of the cell using detergents. She then used her electron microscopy technique to identify the materials inside the lipid membrane. She found both the Australian antigen and a second set of particles that looked like a rhinovirus.

This work was key to convincing the scientific community that hepatitis B had at least two separate antigens. The Australian antigen (later known as HbsAg), and HbcAg, the antigen found in Dane’s samples.

Understanding the structure of the hepatitis B antigens allowed later scientists to establish that the liver damage associated with hepatitis B was actually due to the innate immune response to these antigens, work that eventually land to the development of a vaccine.

Almeida rose to global prominence in early 2020 due to the COVID-19 pandemic. She was the first scientist to get a good picture of a member of the coronavirus family back in the late sixties. As a result, it was her and her team that were responsible for naming the family. They chose “corona” due to the halo of proteins that could be seen on the membrane surface as a result of her images.

This was not a particular highlight of her career or life, just another day in the lab.

But without this piece of trivia, her life would not have come to the attention of as broad an audience as it has. It would certainly not have come to my attention, and for that I am quite grateful; this is not a typical biography for a professional scientist, and it raises some interesting questions.

Her biography demonstrates that Almeida was a hardworking, determined and insightful character. In the UK in the 1930s this was not enough to get a place at university. Without a formal university qualification her career could not progress in her home country, and she needed to move abroad. The structure of the culture in mid 20th century Britain functioned to severely limit her career prospects.

This problem is one that is very much still with our community today. It has been shown time and time again that traditional academic structures make career progression more difficult for women, for people from poor backgrounds, and for minorities. Which begs the question; how many June Almeidas never managed to get the entry-level microscopy job?

The structure of a culture that produces results like this is not fit for purpose. If as a community we believe that talented characters like Almeida should be given every opportunity to contribute to academia, then responsibility falls on us to make visible the warped structure of academic culture. Only with an accurate picture of that culture can work begin on developing a vaccine against it.