A story of persistence, Barbara McClintock rocked the foundation of genetics with her controversial ideas, forming our understanding of "jumping genes" and the dynamic nature of the genome. 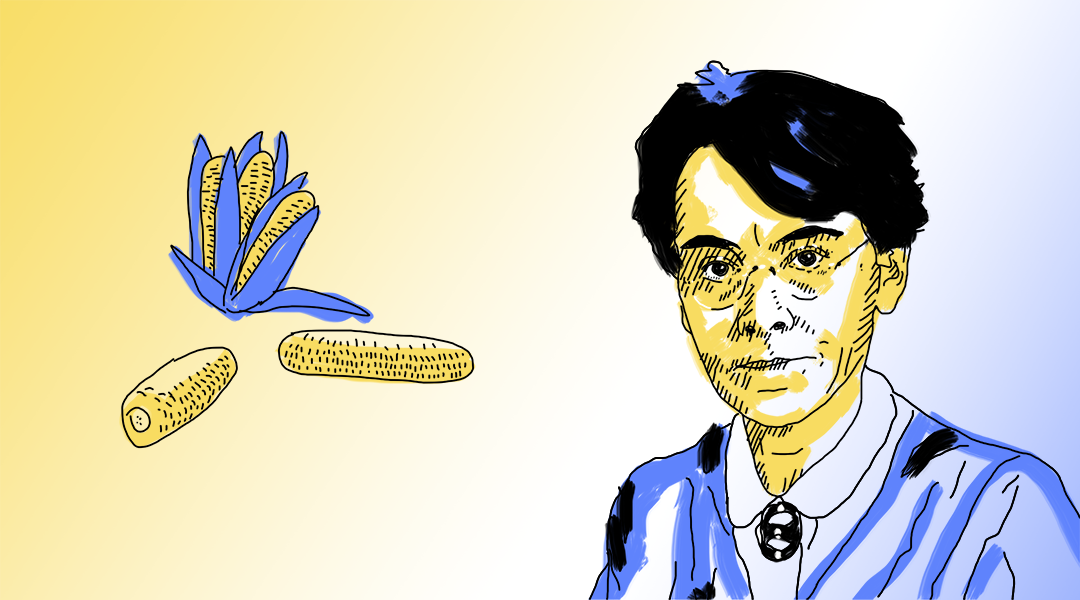 Barbara McClintock, a visionary scientist most famous for her discovery of “jumping genes“, challenged existing paradigms in genetics by making discoveries that went far beyond our understanding at the time — and which won her the Nobel Prize in Physiology or Medicine in 1983, making her the first woman to win a Nobel Prize without sharing it.

For much of the 20th century, scientists believed that genes were stable entities on a chromosome, fixed in place in a long linear pattern like beads on a string. Using her trusty microscope and a staining technique to visualize chromosomes, McClintock used maize as her model organism to demonstrate that the genome was more dynamic than previously thought — a discovery that, while groundbreaking, took the scientific community years to accept.

Her life-long interest in the field of cytogenetics — the study of chromosomes and their genetic expression — began during her undergraduate career, which she began at Cornell University in 1919 as a biology major. At the time, genetics was a relatively new field and Cornell only offered an undergraduate course in the subject, but McClintock took to it instantly, eventually completing a master’s degree and a Ph.D. with specializations in cytology, genetics, and zoology.

After graduating, she spent several years making seminal discoveries in maize genetics, including a pivotal paper published with graduate student, Harriet Creighton, titled “A Correlation of Cytological and Genetical Crossing-over in Zea mays,” in which they established that chromosomes formed the basis of genetics.

“I was just so interested in what I was doing I could hardly wait to get up in the morning and get at it,” she said of her work.

But McClintock eventually left as she was unable to obtain a professorship at Cornell, which at the time did not hire female professors (unless it be in the department of home economics). She was hired as an assistant professor at the University of Missouri in 1936, where she stayed for five years. However, biographical sources indicate that she found teaching distracting and so left academia in 1941, first working solo then joining the Cold Spring Harbor Laboratory, a research facility funded by the Carnegie Institution, in 1944.

Based on the work she had already completed in the field, she was elected to the National Academy of Sciences in 1944 at the age of 42, and in 1945 she was elected the first woman president of the Genetics Society of America.

Ahead of her time

It was during these early years at Cold Spring Harbor that McClintock began to study the color patterns found in maize and how they related to the plant’s genetics. In these experiments, she bred maize plants that carried a recessive brown phenotype (leading to brown kernels) with plants that had a dominant white phenotype (leading to white kernels). Under the accepted theory of genetics and inheritance, the offspring should have only white kernels, as this was the dominant gene. However, this generation were instead white with some brown spots.

She noted that this change occurred too frequently between generations to be the result of unstable genetic mutation, as had been proposed in a 1910 study (though without any physical evidence). So, what was causing a seemingly random variation?

Using a microscope, McClintock was able to trace pigment changes in maize, allowing her to follow the movement of specific genes to different sites within the chromosome where they would reversibly affect the behavior of neighboring genes. This meant that instead of being locked in place and providing the same genetic instructions from generation to generation, some genes could actually move around the chromosome, switching the physical traits on or off depending on certain controlling elements. McClintock coined these genes “transposons” or “jumping genes”.

When she presented her findings at a Cold Spring Harbor Symposium in 1951, she was met with extreme skepticism and even hostility from her peers. “I was startled when I found they didn’t understand it; didn’t take it seriously,” she said. “They thought I was crazy, absolutely mad.”

Her ideas were radical and went against accepted knowledge at the time, with many finding her results to be too abstract and obscure to understand. Unfortunately, this led to many dismissing or ignoring her work, and although she continued with her research anyway, a profound disappointment led McClintock to stop publishing her results and giving lectures.

That is, until a similar phenomenon was described in bacteria in 1960 by François Jacob and Jacques Monod, and the scientific community finally began verifying some of her earlier results. After this, McClintock received a number of accolades and awards, culminating in the 1983 Nobel Prize 35 years after publishing her first paper on transposition.

“I just knew I was right,” she said later. “Anybody who had had that evidence thrown at them with such abandon couldn’t help but come to the conclusions I did about it.”

McClintock’s findings have been fundamental to our understanding of genetics, providing the groundwork for more discoveries in medicine, biology, and beyond. Her story is one of persistence, driven by a love of her subject. She remained active in science even after retiring, attending the annual Cold Spring Harbor Symposia and seminars until she died in 1992 at the age of 90.