Perovskite Stability Gets a 2D Solution

Perovskite structures suffer from moisture and thermal stability issues which prevent their commercial use. This promising solution using organic cations leads to a record high PCE for 2D perovskite devices. 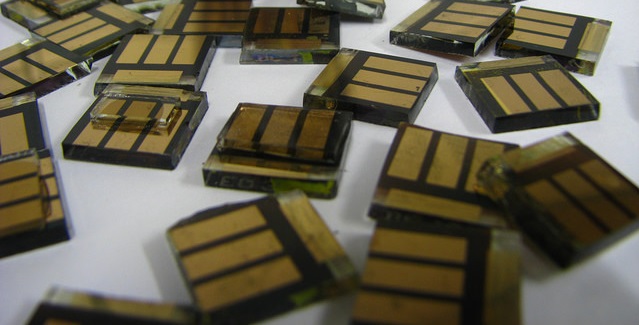 Perovskite materials, particularly the organic–inorganic hybrid perovskites such as methylammonium lead triiodide (MAPbI3) or formamidinium lead triiodide (FAPbI3), readily form hydrated phases. This quickly causes the decomposition of PbI3 into PbI2, leading to structural degradation and consequent property changes that make the perovskites unsuitable for their intended applications. One very visual example is the transformation of the black photoactive phase of FAPbI3 into a completely photo-inactive yellow phase when exposed to humid conditions.

The problem of moisture stability in perovskite materials, which Advanced Science News previously discussed with Drs. Chul-Ho Lee and Min Jae Ko, currently prevents their commercialization and is the subject of significant ongoing research efforts – but it’s not the whole story.

A second great problem faced by perovskite-based materials, and one which is far less well understood, is their thermal instability. The degradation of hybrid perovskite structures has been observed even at temperatures below 100 degrees Celcius. This thermal degradation has, so far, been blamed on either phase transitions or cleavage of the lead–iodide bond and consequent reaction with charge carrier selective layers. 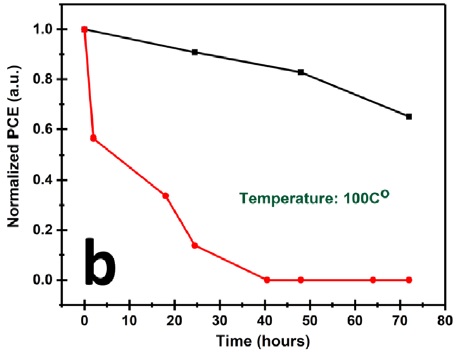 Researchers collaborating among institutes in Canada, China, and the USA have now proposed a solution to both issues that should bring perovskite stability closer to practical industrial standards.

The most successful attempts to address these problems so far have involved the replacement of the very hygroscopic MA cations with less hygroscopic ones. In their recent work, this research team chose the large, hydrophobic organic cation (C6H5(CH2)2NH3)2 – denoted PEA2 – as the spacer in planar perovskite solar cells. Large hydrophobic organic cations are known to generate quite moisture-stable 2D layered perovskite structures; however, previous use of PEA led to a device power conversion efficiency (PCE) of only 4.73% and a large hysteresis (an issue clarified for us previously by Drs. Yi Hou and Christoph Brabec).

Through manipulation of the crystallization process and optimization of the thickness of the solar absorber layer to around 240–260 nm, this team minimized hysteresis and improved the device efficiency, achieving a record PCE for these structures of 5.50%. They were also able to demonstrate the stability of their hot-cast devices, even under conditions of 72% relative humidity, without any protective encapsulation. In the dark, half-lives of 90 hours were attained, which compares rather favorably with the 10-hour half-lives of 3D devices.

Why not try out their experiments in your own lab? Find the details here in Solar RRL.

Could your work on perovskites use an injection of new information? This might help:

The next boost in lithium-ion battery research: Suppressing oxygen evolution
Evolution of the Universe simulated in a lab
Solar chemicals and fuels in the dark
A pain-free microneedle patch to help with weight loss