Graphene films grown over epitaxial metal films deposited on single-crystalline substrates give unique micropits with rectangular and triangular shapes, reflecting the crystallographic orientation of the substrate. 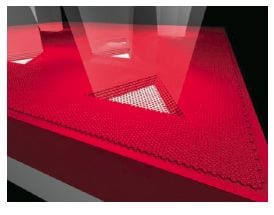 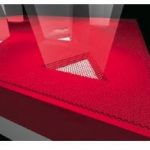 Graphene is an interesting and useful material thanks to its ideal 2D p-conjugated network with atomic-scale thickness. Single- and few-layer graphene films show excellent and unique physical properties, such as extraordinarily high carrier mobility and the quantum Hall effect.

Researchers from Kyushu University in Japan have grown rectangular- and triangular-shaped microscale graphene films on epitaxial Co films deposited on single-crystal MgO substrates with (001) and (111) planes, respectively. Thermal decomposition of polystyrene over the epitaxial metal film in high vacuum gives unique micropits, whose orientation and shape are strongly dependent on the crystallographic orientation of the MgO substrate. Raman mapping measurements reveal preferential formation of few-layer graphene films inside these pits. The graphene films are transferred onto a SiO2/Si substrate while maintaining the original shape, and field-effect transistors are fabricated using the transferred films. The authors’ findings on the formation of rectangular and triangular graphene give new insight into the formation mechanism of graphene and can be applied for more advanced and controlled graphene growth.

This story will be featured on the cover of issue 11 of Small, where the formation of a triangular graphene film inside a micropit of epitaxial metal catalyst is illustrated.

The Promise and Challenges of Nanomedicines in Fighting Cancer
Computational electromagnetics: Know your tools for they shape our future
Gentle laser processing of perovskites at the nanoscale
Exchanging heat for pressure: An efficient route to processing titanium alloys