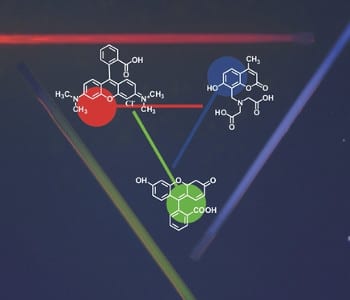 In new work, Dr. Lifeng Chi and co-workers demonstrate a novel microfluidic method to pattern organic films directly in air. In a nutshell, gold patterns on SiO2 were used as microfluidic channels. When heated to above the melting point, the organic molecules become a fluid, which can be transported along the predefined Au lines to form an organic stripe pattern. In conventional microfluidic devices, the transportation is defined by topology pattern of the channel and driven by capillary forces. In this particular method, the dynamic study of the pattern process indicates that the transportation is driven by surface diffusion. The pattern formation is proposed to be related to the wettablilty and molecule-substrate interaction difference of organic molecules on patterned areas and substrate. Beyond the patterning of single-component organic molecules, the authors also demonstrate the organic fluid can act as a carrier to transport and pattern other functional molecules on substrate.

The present work provides an promising method to pattern organic functional molecules. The method is expected to be general and applicable to other molecule/substrate combination, scalable, and compatible with other patterning techniques, such as inkjet printing. On the other hand, the interesting wetting behavior of liquidized organic solids on surfaces also deserves further investigation from the viewpoint of fundament surface physical chemistry.