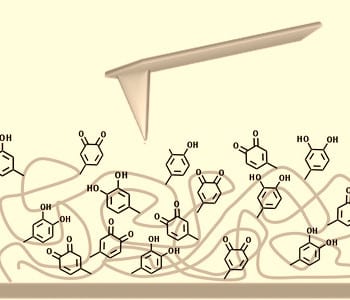 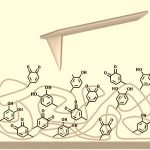 Marine mussels are famous for their remarkable ability to stick tightly to rock’s surfaces against tides in a marine environment. This feature has been attributed to the special features of the mussel holdfast proteins. It was found that mussel holdfast proteins contain large amount of non-canonic amino acid — 3, 4-dihydroxyphenylalanine (DOPA). The catechol moiety of DOPA has been proven to show strong adhesions to various types of wet surfaces, including metals, metal oxides, and polymers. Inspired by such ingenious design, a wide range of catechol-containing synthetic polymers have been successfully developed as efficient surface coating materials. Polydopamine (PDA) is one of such polymers, pioneered by Messersmith and co-workers. The use of natural mussel holdfast proteins and catechol-containing synthetic polymers for interfacial adhesion has been extensively explored. However, rational tailoring of the adhesion strength remains elusive.

In a recent work by Dr. Daniel Ruiz-Molina and co-workers from Institut Catala de Nanociencia i Nanotecnologia Campus, Bellaterra, Spain, they reported a catechol-based self-assembled monolayer (SAM) technique to produce more homogeneous catechol-containing surface with improved adhesion properties. They first synthesized a molecule that contains a thiol on one end and a catechol on the other. Due to strong thiol-gold bonding, this molecule can self-assemble on gold substrates with all catechols facing upwards. In this strategy, all catechols are orderly arranged and can collectively contribute to the interfacial adhesion. On the contrary, in DOPA-containing polymers, catechols are randomly distributed in the surface coating layer and the overall adhesion is not optimized. Indeed, based on local force-distance measurements obtained by atomic force microscopy (AFM), the average adhesion force on the catechol-based SAM is ~ 45 nN, stronger than that of a control PDA-coated surface. Moreover, the force distribution on the SAM is much narrower than that on the PDA-coated surface, indicating that the SAM is more homogeneous. Such amazing adhesion properties of the catechol-based SAM may have broad applications in nanotechnology: the authors demonstrated that using this technique, they could successfully engineer homogeneous and stable magnetic nanoparticle-coated surfaces that outperforms the PDA-based coating method.

This work represents a prodigious example of rationally tailoring the performance of biomimetic materials. In natural mussel holdfast proteins and synthetic catechol-containing polymers, the randomly distributed catechol groups are designed to balance the surface adhesion and cohesion (the interactions between themselves). However, in order to make full use of all catechols for adhesion, it is important to orderly arrange them on a surface. The SAM method could meet this technical requirement and produce a surface with stronger adhesion. Moreover, it is anticipated that this technique can be easily extended to other surfaces, such as silica, by introducing novel surface chemistry.

Despite the advantages of this technique, the authors also provided some caveats. The adhesion performance of the SAM surface largely depends on its roughness. Rough surfaces lead to much less adhesion forces, although the adhesion capability is maintained.