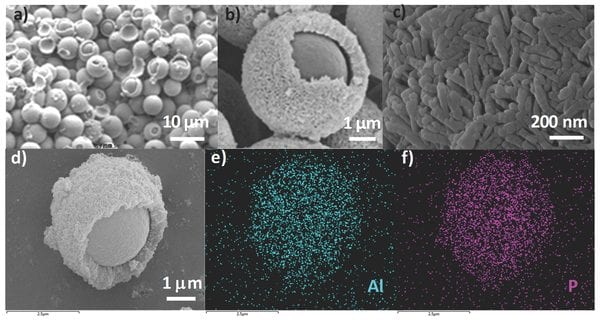 The researchers effectively controlled the morphology of the ys-AlPhPO by hydrothermal treatment (HT) using urea as the precipitating agent. Slow hydrolysis of urea over time allowed for a distinct evolution of morphology as the pH changes and was captured by SEM and TEM images. From pH 1.6 to 2.1, they observed flower-like microspheres that acquire smooth surfaces via Oswald ripening after 2.5 hours to give core-shell AlPhPO (cs-AlPhPO). Another Oswald ripening gave rise to the yolk-shell structure (ys-AlPhPO) at pH 4.6. This structure is held together by electrostatic interactions, where the mesoporous shell of ys-AlPhPO has a positive potential of +24.6 mV, while the smooth-surfaced microspheres—the “yolk”—has a negative potential of −4.1 mV. After three hours of HT, the yolk was gradually converted to the shell as pH increased. From pH 7.3 to 8.7, the microspheres transformed into spiny and porous structures with a hollow core (hs-AlPhPO). These changes in morphology are accompanied by a change in the Al coordination environment. The Al center is initially tetracoordinated by phenylphosphonate and becomes hexacoordinated with hydroxyl groups from the solution over time. When the reaction time approaches 19 hours, aluminum achieves octahedral coordination. Another contributor to the morphological evolution is the formation of CO2 and NH3 after prolonged HT, which act as a template for the formation of the final hollow structure.

The researchers also tested the ys-AlPhPO microspheres in dye adsorption and bio-adsorption experiments. The ys-AlPhPO could adsorb both cationic methylene blue (MB) and anionic binuclear cobalt phthalocyanine ammonium sulphonate (PDS) from solution, with the best adsorption performance occurring under acidic conditions (pH 1), and was highly effective at adsorbing salmon sperm DNA. In another application, the researchers tested the ys-AlPhPO microspheres for the enrichment of alpha-conotoxin IM, a low-abundance phosphopeptide. The signal is undetectable in the the matrix-assisted laser desorption-ionization time-of-flight mass spectrometry (MALDI-TOF MS) spectrum of the unenriched sample and increases significantly after exposure to the microspheres. Based on these results, the microspheres show potential in other important applications such as contaminated water treatment, nanomedicine, and catalysis.

Metamaterial Improves Solar Cells
A rose garden on titanium surfaces
Taking the sting out of dental procedures with microneedles
Printing liquid metals: The next generation of wiring