Old technique can be used to sort carbon nanotubes

An old, somewhat passé, trick used to purify protein samples based on their affinity for water has found new fans at NIST. 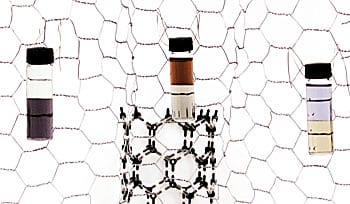 An old, somewhat passé, trick used to purify protein samples based on their affinity for water has found new fans at the National Institute of Standards and Technology (NIST), where materials scientists are using it to divvy up solutions of carbon nanotubes, separating the metallic nanotubes from semiconductors. They say it’s a fast, easy and cheap way to produce high-purity samples of carbon nanotubes for use in nanoscale electronics and many other applications.

Carbon nanotubes are formed from rolled-up sheets of carbon atoms arranged in a hexagonal pattern resembling chicken wire. One of the amazing features of nanotubes is that, depending on just how the sheet rolls up, a quality called chirality, the resulting tube can behave either like a semiconductor, with various properties, or like a metal, with electrical conductance up to 10 times better than copper. One big issue in creating commercially viable electronics based on nanotubes is being able to efficiently sort out the kind you want.

Thinking about how to do this, says NIST researcher Constantine Khripin, brought up the subject of biochemists and so-called “two-phase liquid extraction.” “Biologists used this to separate proteins, even viruses,” says Khripin, “It’s an old technique, it was popular in the 70s, but then HPLC [high-performance liquid chromatography] replaced a lot of those techniques.” People use HPLC to partition carbon nanotubes as well, he says, but it’s less successful. HPLC divides things by exploiting differences in the mobility of the desired molecules as they travel small columns loaded with tiny spheres, but carbon nanotubes tend to stick to the spheres, reducing yield and eventually clogging the equipment.

The concept of liquid extraction is relatively straightforward. You make a mixture in water of two polymers that you’ve selected to be just slightly different in their “hydrophobicity,” or tendency to mix with water. Add in your sample of stuff to be separated, stir vigorously and wait. The polymer solutions will gradually separate into two distinct portions or “phases,” the lighter one on top. And they’ll bring along with them those molecules in your sample that share a similar degree of hydrophobicity.

It turns out that this works pretty well with nanotubes because of differences in their electronic structure—the semiconductor forms, for example, are more hydrophobic than the metallic forms. It’s not perfect, of course, but a few sequential separations ends up with a sample where the undesired forms are essentially undetectable.

Be honest. It’s not that easy. “No,” agrees, Khripin, “People tried this before and it didn’t work. The breakthrough was to realize that you need a very subtle difference between the two phases. The difference in hydrophobity between nanotubes is tiny, tiny, tiny.” But you can engineer that with careful addition of salts and surfactants.

“This technique uses some vials and a bench-top centrifuge worth a couple hundred dollars, and it takes under a minute,” observes team member Jeffrey Fagan. “The other techniques people use require an HPLC on the order of $50,000 and the yields are relatively low, or an ultracentrifuge that takes 12 to 20 hours to separate out the different metals from semiconductors, and it’s tricky and cumbersome.”

“The nanotube metrology project at NIST has been around for a quite a number of years,” says senior team member Ming Zheng. “It has been a constant interest of ours to develop new ways to separate nanotubes, cheaper ways, that industry can use in the development of nanoelectronics and other applications. We really think we have a method here that fits all the criteria that people are looking for. It’s easy, it’s scalable, it’s high resolution—all the good attributes put together.”

Breaking down a cell's barriers with a medicine-carrying nano-submarine
Printing in color with photoswitchable polymers
Bending the world's strongest material ... on the nanoscale
Protein Biohybrids as a Toolkit for New Materials