Scientist observe the impact of subtle changes in the electron distribution of a crystal on its atomic structure on ultrashort time scales. 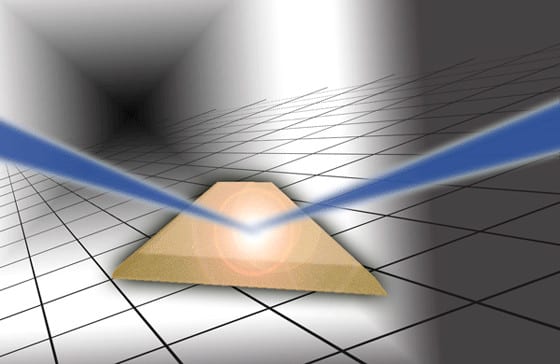 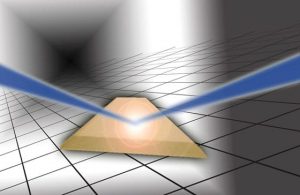 An ultraviolet light pulse hits the titanium dioxide crystal. The laser pulse induces a redistribution of weakly bound electrons, which leads to a shift of the equilibrium position of the atoms in the crystal lattice. Image: Thorsten Naeser.

When a crystal is hit by an intense ultrashort light pulse, its atomic structure is set in motion. A team of scientists from the Max Planck Institute of Quantum Optics (MPQ), the Technischen Universität München (TUM), the Fritz-Haber Institute in Berlin (FHI) and the Universität Kassel can now observe how the configuration of electrons and atoms in titanium dioxide, a semiconductor, changes under the impact of an ultraviolet laser pulse, confirming that even subtle changes in the electron distribution caused by the excitation can have a considerable impact on the whole crystal structure.

Knowledge regarding the interaction between light and solid matter on an atomic scale is still comparable to a map with many blank spots. A number of phenomena are still waiting to be observed or understood. A new, up to date unknown aspect of the interplay between light and matter has now been examined by a team of scientists using intensive ultraviolet laser pulses with only a few femtoseconds duration.

The physicists illuminated a titanium dioxide crystal (consisting of titanium and oxygen atoms) with an intense ultraviolet laser pulse of less than five femtoseconds duration. The laser pulse excites the valence electrons in the crystal and generates a small number of hot electrons with a temperature of several thousand Kelvin. Valence electrons are electrons that are only weakly bound to the atoms in a crystal that interact strongly with each other and therefore form the bond between the atoms in a crystal. The continuous interplay between the positions of the atomic cores and the valence electrons determines the material characteristics such as electric conductivity, optical properties or the crystal lattice structure.

Following the first, intense laser pulse, the changes in the reflectivity of the crystal on the femtosecond timescale were observed by a second, weak light pulse. This measurement provides the scientists with information on the changes in the crystal induced by the first laser pulse: the intense ultraviolet laser pulse did not only heat up the valence electrons but also changed the electron distribution within the lattice. The electron density was reduced around the oxygen atoms and increased around the titanium atoms. This redistribution of the electrons causes a shift of the equilibrium position of the oxygen atoms relative to the titanium atoms, which leads to an oscillatory motion of the oxygen atoms around the new equilibrium position. In an intuitive picture the oxygen atoms in the crystal potential surface can be compared to a ball in a bowl. In the ground state, the ball is at rest at the center of the bowl. The excitation of the electrons corresponds to a sudden shift of the bowl, and the ball oscillates around its new minimum position.

In their experiment, the scientists also observed a suprising effect: after the excitation with the laser pulse, the electrons cool down to room temperature within about 20 femtoseconds, while the crystal is only heated slightly on these timescales. The cooling of the electrons led to an additional significant change in the valence electron distribution. In consequence, the equilibrium position of the lattice was shifted even further from the initial position of the ground state. Such a dependence of the crystal structure on the electron temperature has long been predicted theoretically. Now it could be observed experimentally for the first time. The results show that even subtle changes in the electron distribuition can have a significant impact on the equilibrium state of a crystal. The understanding of such phenomena can be helpful in the design of new materials.