Recent work reports the use of a magnetic graphene oxide-iron oxide nanoparticle nanocomposite to fabricate an MRAM operating at room temperature. 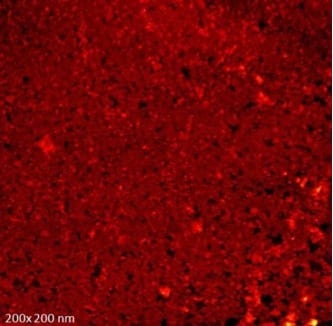 An SEM image of an mGO sheet

It is becoming increasingly important to leverage the spin of the electron in modern electronic device design. Spintronics, where the transportation of carriers is dependent on the populations of spin-on and spin-down electrons at the Fermi level, provides new opportunities for developing electronic devices based on spin-dependent effects.

Compared with conventional silicon-based information storage devices such as electrically erasable programmable read-only memories and flash memories, MRAMs based on spintronics have 1000 times the writing speed and 1/10000 data access time with low power consumption and no wearout after many write cycles. It is obvious that spintronics applications can be facilitated by the use of novel materials combining the properties of both magnet and semiconductor for use as spin polarized carrier source and for easy integration into semiconductor systems. Many organic semiconductors have been developed to achieve this goal owing to their long spin diffusion length. However, the search for materials that can operate at room temperature remains elusive because of the strong temperature dependence of the spin diffusion length.

Lin et al. found that the Co/mGO-NP/Pt resistance increased with increasing magnetic field strength and the sample remained in the higher resistive state when the magnetic field was switched off. In contrast, the Pt/mGO-NP/Pt resistance increased with increasing field strength and is restored to its initial resistive state when the magnetic field was switched off. Hence although the device resistance increases in both Co/mGo-NP/Pt and Pt/mGO-NP/Pt devices due to trapping of anti-parallel spin species, a memory effect can only be observed in the Co/mGO-NP/Pt device, owing to spin blocking at the Co electrode. Furthermore, the Co/mGO-NP/Pt device is easily reset by reversing the current at -0.1 T, while a separately fabricated Co/mGO-NP/Co device loses the reset possibility due to the continual trapping of the opposite spin species leading to a continuous increase in electrical resistance over time.

Lin et al. have developed an excellent material composite system for spintronics application, especially for room temperature MRAM devices. The mGO (see Figure) contains a high concentration of nanovoids with edges behaving as spin-polarized electron sites facilitating the trapping of spin-polarized electrons. The iron oxide nanoparticles display superparamagnetism ensuring the manipulation of electron spins. The combination of mGO and iron oxide achieves a semiconductor showing superparamagnetism at room temperature. This, together with the asymmetric design of Co and Pt electrodes, enables the steady memory effect as well as reset function, which are required functions in an MRAM device. This research contributes significantly to current efforts in novel magnetic semiconductor materials, and would be valuable for developing future graphene-based spintronic devices.