A new twist for structural colour

Reflecting 30% of the light that hits it, the Pollia condensata berry uses structural colour—no chemical pigments—to outshine even the morpho butterfly. 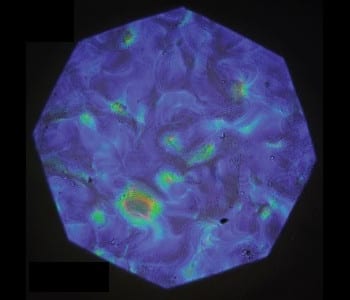 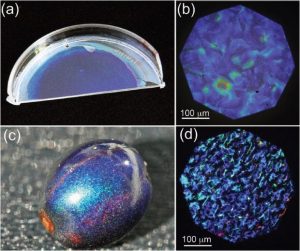 Every now and then you come across something so amazing and unique that you wonder how you could never have heard of it before.

Reflecting 30% of the light that hits it, the iridescent African Pollia condensata berry uses structural colour—no chemical pigments—to outshine even the morpho butterfly.

Layers of aligned cellulose microfibrils form stacks inside the plant cell walls. These stacks are arranged helicoidally, causing a multilayer Bragg reflection effect. The number of layers in the stack determines the colour viewed, and the direction in which the stack is twisted—to the left or right—produces a corresponding circular polarization of the light.

Nanocrystals of cellulose—the most readily available biopolymer—have now been made to imitate this spectacular selective reflection behaviour by S. Vignolini and co-workers, the same group that uncovered P. condensata‘s secrets. Using a simple self-assembly method, they were able to tune the colour of cellulose nanocrystal films just by altering the evaporation conditions as the films dried.

Drying the films slowly produces a nematic liquid crystal phase which is affected by several parameters. The key to this setup, though, is the humidity, which drives the water loss from between the crystals, which in turn determines the final film structure. The faster the films were allowed to dry (the lower the humidity in the evaporation chamber), the more blue-shifted their ultimate colour appeared.

By simultaneously collecting circular polarisation-resolved spectra and microscope images of the sample at regular intervals during evaporation, these researchers were able to distinguish the phase changes of the sample and to confirm that the colour variation initially results from differences in the uniformity of the pitch of the helical stacks. Once the films are almost dry, however, a certain critical concentration of cellulose nanocrystals is reached and a sudden increase in the refractive index contrast occurs.

Due to their sufficiently robust and expected biocompatible nature, the application of such structurally coloured films is virtually unlimited.