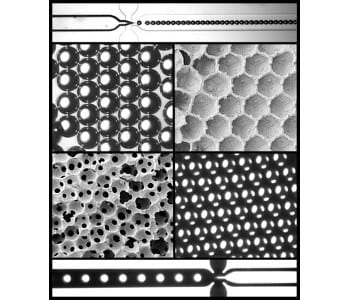 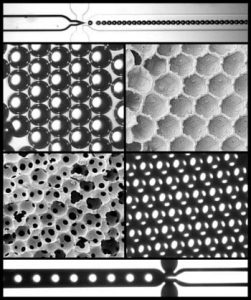 Everyone is familiar with the polymer foam Styrofoam. It is a lightweight porous material and vastly used for insulation, safety helmets, packing material or even floating devices. It can be found in almost every household. Styrofoam is a trade name; the material consists of polystyrene and is produced in a specific, patented way. If Styrofoam is produced by means of any other method, it is called polystyrene foam.

The production of polystyrene foams is rather complex and results in morphologies where neither the size nor the connectivity of the foam pores is well controlled. In order to be able to tune the material properties and also to tailor-make polystyrene foams for a specific application it is necessary to control the foam morphology. To achieve this goal alternative production methods have been developed based on the use of templates.

A slightly more complex, yet also possible method is the integration of air bubbles into a styrene-in-water emulsion. This process leads to the formation of a so-called foamed emulsion the solidification of which also leads to polystyrene foams. To date, most templates have been generated by shaking or stirring the two immiscible phases, which leads to emulsions and foamed emulsions, respectively, with broad distributions in the droplet and bubble size. It goes without saying that the polymerization of these templates results in polymer foams with broad distributions in the pore size.

The question of how to synthesize polystyrene foams with controlled pore sizes and narrow pore size distributions has now been answered by a research team from Stuttgart University (A. Quell, J. Elsing, C. Stubenrauch) in collaboration with the Université Paris-Sud/CNRS (W. Drenckhan). They have developed two new templating routes for the production of equally sized (monodisperse) and highly ordered polystyrene foam pores.

Both routes are based on the generation of monodisperse templates via microfluidic Lab-on-a-Chip techniques. Microfluidics deals with the flow of liquids and gases in small, micron-sized channels. If the channels are designed and fed in a specific way, microfluidics allows generating monodisperse templates. The microfluidic channels used by the researchers are either fed with a styrene-in-water emulsion and a gas (first route) or with styrene and water (second route).

What is thus obtained is monodisperse foamed styrene-in-water emulsions and water-in-styrene emulsions, respectively. Both dispersions (foamed emulsion and emulsion) are formed bubble by bubble (droplet by droplet), with all bubbles (droplets) having the same size with a remarkable precision in bubble (droplet) size. Using microfluidics to generate the templates not only allows controlling the droplet/bubble size but also the volume fraction of both dispersions, which, in turn, is important for the control of the polystyrene density. When still in the liquid state, the equally sized bubbles and droplets order in a close-packed arrangement, thus leading to ordered polystyrene foams when polymerized. In conclusion, both templating routes lead to polystyrene foams with controllable density, pore size, pore size distribution and connectivity, thereby opening up a new arena for the production of tailor-made polystyrene foams.