A new hydrogel created by Cornell researchers is so soft that it can flow like a liquid and then return to its original shape. 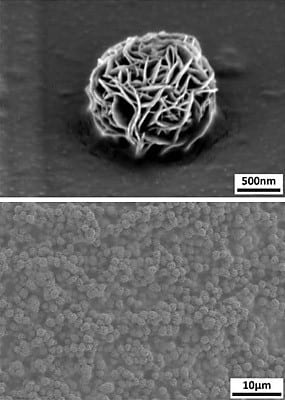 Under an electron microscope the material is revealed to consist of tiny “bird’s nests” of tangled DNA, top, which are tied together by more DNA stands into a mass, bottom. The tangled structure creates many tiny spaces that absorb water like a sponge. Image: Luo Lab.

A new material created by Cornell researchers is so soft that it can flow like a liquid and then return to its original shape. It is a hydrogel, a mesh of organic molecules with many small empty spaces that can absorb water like a sponge. It qualifies as a “metamaterial” with properties not found in nature and may be the first organic metamaterial with mechanical meta-properties.

Hydrogels have already been considered for use in drug delivery — the spaces can be filled with drugs that release slowly as the gel biodegrades — and as frameworks for tissue rebuilding. The ability to form a gel into a desired shape further expands the possibilities. For example, a drug-infused gel could be formed to exactly fit the space inside a wound.

Dan Luo, professor of biological and environmental engineering, and colleagues describe their creation in the December 2nd issue of the journal Nature Nanotechnology.

The new hydrogel is made of synthetic DNA. In addition to being the stuff genes are made of, DNA can serve as a building block for self-assembling materials. Single strands of DNA will lock onto other single stands that have complementary coding, like tiny organic Legos. By synthesizing DNA with carefully arranged complementary sections Luo’s research team previously created short stands that link into shapes such as crosses or Y’s, which in turn join at the ends to form meshlike structures to form the first successful all-DNA hydrogel. Trying a new approach, they mixed synthetic DNA with enzymes that cause DNA to self-replicate and to extend itself into long chains, to make a hydrogel without DNA linkages.

“During this process they entangle, and the entanglement produces a 3-D network,” Luo explained. But the result was not what they expected: The hydrogel they made flows like a liquid, but when placed in water returns to the shape of the container in which it was formed.

“This was not by design,” Luo said.

Examination under an electron microscope shows that the material is made up of a mass of tiny spherical “bird’s nests” of tangled DNA, about 1 micron (millionth of a meter) in diameter, further entangled to one another by longer DNA chains. It behaves something like a mass of rubber bands glued together: It has an inherent shape, but can be stretched and deformed.

Exactly how this works is “still being investigated,” the researchers said, but they theorize that the elastic forces holding the shape are so weak that a combination of surface tension and gravity overcomes them; the gel just sags into a loose blob. But when it is immersed in water, surface tension is nearly zero — there’s water inside and out — and buoyancy cancels gravity.

To demonstrate the effect, the researchers created hydrogels in molds shaped like the letters D, N and A. Poured out of the molds, the gels became amorphous liquids, but in water they morphed back into the letters. As a possible application, the team created a water-actuated switch. They made a short cylindrical gel infused with metal particles placed in an insulated tube between two electrical contacts. In liquid form the gel reaches both ends of the tube and forms a circuit. When water is added. the gel reverts to its shorter form that will not reach both ends. (The experiment is done with distilled water that does not conduct electricity.)

The DNA used in this work has a random sequence, and only occasional cross-linking was observed, Luo said. By designing the DNA to link in particular ways he hopes to be able to tune the properties of the new hydrogel.