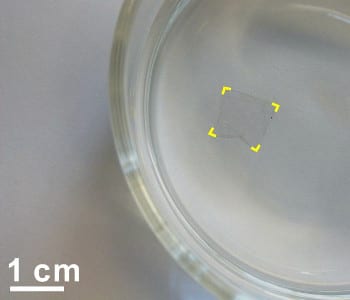 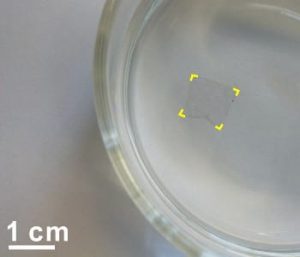 A square-centimeter sheet of rebar graphene floats in water. The rebars allow the sheet to be transferred from one surface from another without using polymer in an intermediate step. The process was created in the lab of chemist James Tour at Rice University. Image: Tour Group/Rice University.

Carbon nanotubes are reinforcing bars that make two-dimensional graphene much easier to handle in a new hybrid material grown by researchers at Rice University.

The Rice lab of chemist James Tour set nanotubes into graphene in a way that not only mimics how steel rebar is used in concrete but also preserves and even improves the electrical and mechanical qualities of both.

The technique should make large, flexible, conductive and transparent sheets of graphene much easier to manipulate, which should be of interest to electronics manufacturers, Tour said. He suggested the new hybrid could, upon stacking in a few layers, be a cost-effective replacement for expensive indium tin oxide (ITO) now used in displays and solar cells.

The research appears this month in the American Chemical Society journal ACS Nano.

Graphene, a single-layer matrix of carbon atoms, may be one of the strongest materials on the planet, but it can be a challenge to lift the tiny sheets from the catalyst substrate on which they’re grown, generally by chemical vapor deposition (CVD), Tour said.

“Normally you grow graphene on a metal, but you can’t just dissolve away the metal,” Tour said. “You put a polymer on top of the graphene to reinforce it, and then dissolve the metal.

“Then you have polymer stuck to the graphene. When you dissolve the polymer, you’re left with residues, trace impurities that limit graphene’s effectiveness for high-speed electronics and biological devices. By taking away the polymer support step, we greatly expand the potential for this material.”

To create what they call rebar graphene, the researchers simply spin-coat and then heat and cool functionalized single- or multiwalled carbon nanotubes on copper foils, using the nanotubes themselves as the carbon source. When heated, the functional carbon groups decompose and form graphene, while the nanotubes partially split and form covalent junctions with the new graphene layer.

“The nanotubes actually become one with the material in certain places,” Tour said. “It’s a true hybrid with in-plane nanotubes covalently bonded to graphene.”

The interconnected, embedded nanotubes strengthen the graphene, Tour said. “We can see in our images how well the nanotubes bear the load. When we stretch the material, the tubes get thinner,” he said. Because the electron microscope images let them determine the nanotubes’ chirality – the angles of the hexagons that make up the tube — the researchers were able to calculate the tubes’ diameters and know precisely how much thinner they get under tension.

The networked nanotubes also make the material a better conductor than standard CVD-grown graphene, Tour said. Graphene as grown is never a perfect matrix of hexagons; instead, it consists of crystals that grow separately and connect at grain boundaries that disrupt the flow of electrons. The nanotubes in rebar graphene effectively bridge those boundaries.

“The big thing for industry is to see if they can get graphene to substitute for ITO for transparent displays,” Tour said. “But ITO is rigid, and it breaks when you drop your smartphone, for example. Graphene and nanotubes, on the other hand, would afford flexible displays. We showed in our tests that rebar graphene has better conductivity than normal graphene at the same transparency, and with layering, it could be ITO-competitive.”