Scientists pave way for nanobots to one day diagnose and treat disease with the first DNA-based motor to run on chemical energy. 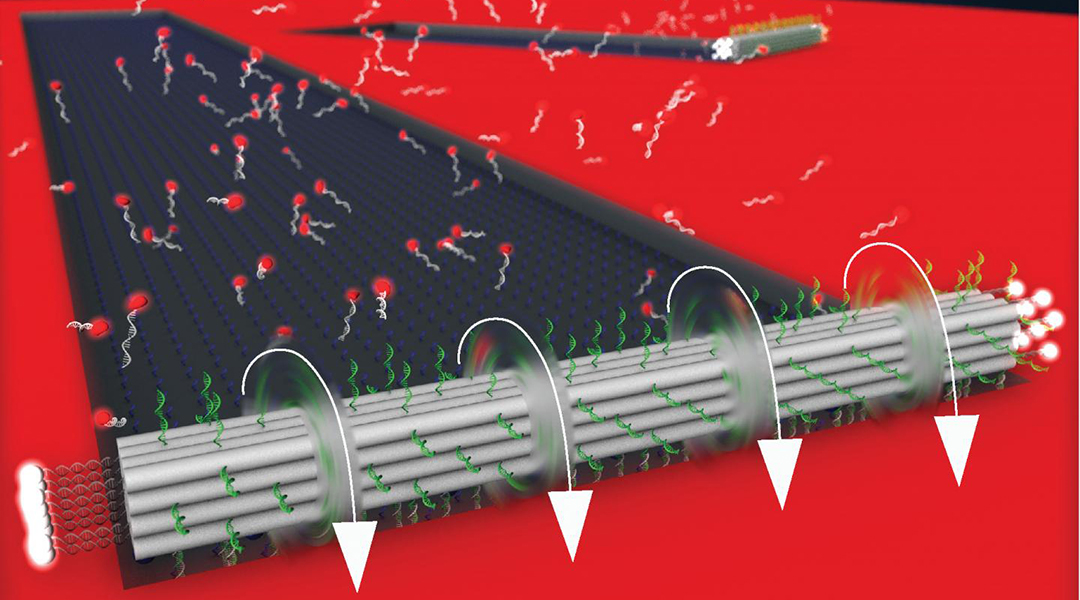 “Nanoscale motors have tremendous potential for applications in biosensing, in building synthetic cells and also for molecular robotics,” said Khalid Salaita — senior author of the paper and a professor of chemistry at Emory University — in a press release. “DNA origami allowed us to tinker with the structure of the motor and tease out the design parameters that control its properties.”

DNA origami is a powerful method for building three-dimensional structures on the nanoscale. It involves the folding of DNA strands using the natural binding interactions between base pairs along with hundreds of short staple strands to fold a long DNA strand into the desired shape.

The team was able to use this technique to overcome longstanding limitations that have hindered DNA-based motors such as slow movement whose direction can be difficult to control. Traditional DNA motors are designed to “walk” along a track using leg-over-leg motion; the mechanism involves binding a foothold site, followed by a transformation step (achieved through a chemical reaction) that breaks the affinity for the occupied foothold and directs the “foot” toward another, unoccupied foothold site.

But according to the researchers, walking motors with only two legs are in general unstable, while the would-be simple solution of just adding more legs actually slows them down.

The team’s solution was to create a motor that, instead, rolls. The new motor consists of 16 bundled DNA helices that were linked together to produce a rectangular, rod-shaped “chassis” with protruding strands of DNA covering each of its four sides, which act like little feet. What’s even more impressive is that the researchers devised a way for their motor to run on chemical energy, something that has not been reported before.

To run the motor, it is placed on a track made from RNA. Each of the 36 DNA legs were built to contain complementary strands to the RNA track, which means that when the motor’s legs on one face of the chassis get close to the track, the RNA strands will pull them toward itself and bind them through base pairing interactions. An enzyme that is specifically targets DNA/RNA bonds quickly breaks these interactions, causing the motor to roll as the DNA legs on the next face get pulled toward the track.

The researchers measured instantaneous speeds of up to 100 nm per minute — the fastest nanoscale DNA motor reported to date — even when the chassis was loaded with additional cargo (just extra strands of DNA).

“Our engineered DNA motor is fast, but we still have a long way to go to achieve the versatility and efficiency of nature’s biological motors ” said Yonggang Ke, assistant professor at Emory’s School of Medicine and Department of Biomedical Engineering, and one of the study’s authors. “Ultimately, the goal is to make artificial motors that match the sophistication and functionality of proteins that move cargo around in cells and allow them to perform various functions.”

Additional potential applications outside of drug delivery include building nanocomputers and nanorobots. And according to Alisina Bazrafshan, an Emory Ph.D. candidate and first author of the paper, “While these applications may seem like science fiction now, our work is helping move them closer to reality.”

The team’s use of DNA origami also helped them to easily explore parameters such as how leg density and distribution, as well as the rigidity of the body, affect motor design. This flexibility could allow future studies to explore more optimal desgins or see more flexibility in what these DNA motors can do.

“We provided a tunable platform for DNA origami motors that other researchers can use to design, test and optimize motors to further advance the field,” Bazrafshan said. “Our system allows you to test the effects of all kinds of variables, such as chassis shape and rigidity and the number and density of legs to fine tune your design. We hope other researchers will come up with other creative designs based on these findings.