Neurophotonics: In Pursuit of an Inorganic Brain 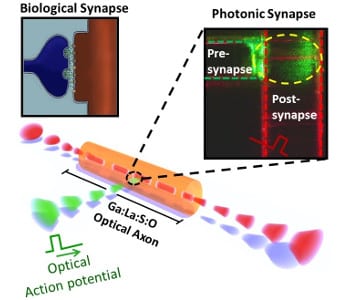 Your brain, greatly simplified, is a computer which processes information by transmitting electrical signals via neurons, which are a type of organic microfibre. Mimicking this structure—the pursuit of a field known as neuromorphic engineering—with inorganic materials is proving tricky, and the efficiency of the structures developed so far is still orders of magnitude below that of your own brain. 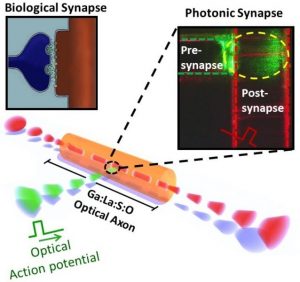 But don’t scoff yet. Researchers from Singapore and the UK have now got a step closer, using metal sulphides.

Microfibres constructed from metal sulphides allow photonic signals to be generated and propagated just like the electronic signals in a human brain. Such materials can be altered both reversibly and irreversibly by illumination, allowing them to mimic the conditions of synapses underoing changes due to biological and electrical signals, or, as the researchers themselves put it, these microfibres can perform analogous processes to the “fundamental neurophysiological functions of the mammalian central nervous system”.

They generate an optical bias in their optical fibre ‘axon’ and then introduce laser pulses. This photonic synapse can then engage in a number of different types of behaviour, all of which are linked to learning and cognition in the brain: temporal and spatial summation, excitatory and inhibitory post-synaptic potentials, and short- and long-term plasticity.

Given that optical fibres can carry a lot of information over a broad bandwidth and could be combined with photonic memory devices, this work opens up the possibility to configure readily scalable neurophotonic systems, working over multiple wavelengths and channels.

Bottlebrush polymers create a rainbow of structural colors
Discovery of an Unusual Quasiparticle in a 2D Material
The high-throughput highway to computational optoelectronic semiconductor screening
Computational electromagnetics: Know your tools for they shape our future