ETH researchers have developed plasmonic particles that are relatively easy to produce and have a wide range of applications, including cancer treatment. 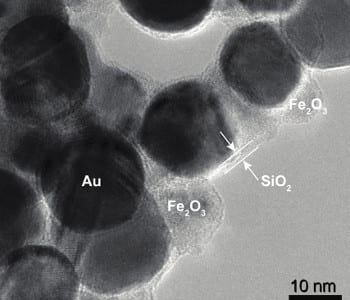 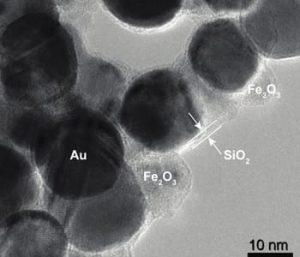 Nanoparticles have a great deal of potential in medicine: for diagnostics, as a vehicle for active substances or a tool to kill off tumours using heat. ETH Zurich researchers have now developed particles that are relatively easy to produce and have a wide range of applications.

If you put your hand over a switched-on torch in the dark, it appears to glow red. This is because long-wavelength red light beams penetrate human tissue more effectively than short-wavelength blue light. ETH Zurich researchers exploit this fact in a new kind of nanoparticles: so-called plasmonic particles, which heat up when they absorb near-infrared light. This could enable them to kill tumour tissue with heat, for instance.

Gold is a popular material for nanoparticles used therapeutically, as it is well tolerated and does not usually trigger any undesirable reactions. In the characteristic ball or sphere shape of nanoparticles, however, gold does not have the necessary properties to work as a plasmonic particle that absorbs sufficiently in the near-infrared spectrum of light to heat up. To do so, it needs to be moulded into a special shape, such as a rod or shell, so that the gold atoms adopt a configuration that starts absorbing near-infrared light, thereby generating heat. Producing such nanorods or nanoshells in sufficient amounts, however, is complex and expensive.

Aggregates instead of rods

A team of researchers headed by Sotiris Pratsinis, Professor of Particle Technology at ETH Zurich, has now discovered a trick to manufacture plasmonic gold particles in large amounts. They used their existing know-how on plasmonic nanoparticles and made sphere-shaped gold nanoparticles that display the desired near-infrared plasmonic properties by allowing them to be aggregated. Each particle is coated with a silicon dioxide layer beforehand, which acts as a placeholder between the individual spheres in the aggregate. Through the precisely defined distance between several gold particles, the researchers transform the particles into a configuration that absorbs near-infrared light and thus generates heat.

“The silicon dioxide shell has another advantage”, explains Georgios Sotiriou, first author on the study and, until recently, a postdoc in Pratsinis’ research group and currently an SNF Fellow at Harvard University: “It prevents the particles from deforming when they heat up.” This is a major problem with nanorods. If the rods lose their shape while heating up, they lose their desired plasmonic properties and are no longer able to absorb enough near-infrared light to generate heat.

The researchers have already tested the new particles on breast cancer cells in a Petri dish and discovered that after exposure to near-infrared light the nanoparticles heated up sufficiently to kill off the cells, while cells survived in control experiments (with particles but without radiation and with radiation but without nanoparticles).

To be able to steer the particles specifically towards cancer tissue, the researchers also mixed superparamagnetic iron oxide particles in with the gold particles, which enable the nanoaggregates to be controlled via magnetic fields and may enhance their accumulation in a tumour. Moreover, this opens up the possibility of heating the aggregates in deep layers of tissue that infrared light can no longer reach via magnetic hyperthermia. Here, the heating of the particles is induced by a magnetic field, where the plus and minus poles alternate at a rapid rate.

“A lot of questions still need to be answered before the particles can be used in humans”, says Jean-Christophe Leroux, Professor of Drug Formulation and Delivery at ETH Zurich, who was also involved in the research project. Although gold, silicon dioxide and iron oxide are well tolerated, what happens to the particle aggregates in the body in the course of time – whether they accumulate in the liver or are broken down and excreted, for instance – still needs to be investigated.

The hybrid iron oxide-gold nanoparticles are not only able to kill off tumour cells through heat; they could also be used as a contrast medium for imaging processes in diagnostics by magnetic resonance imaging, as investigated in collaboration with University Hospital Zurich, or as part of a vehicle that carries active substances. “You could even couple the particles with temperature-responsive drug carriers, which would then allow the drug release if a certain temperature were exceeded”, explains Sotiriou. This would allow undesirable side effects on the rest of the body to be reduced or even avoided.