A diamond film/graphene/nanotube structure was one result of new research carried out by scientists at Rice University and the Honda Research Institute USA. 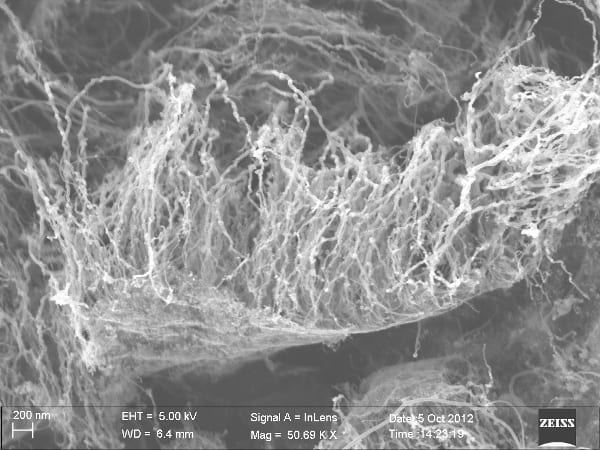 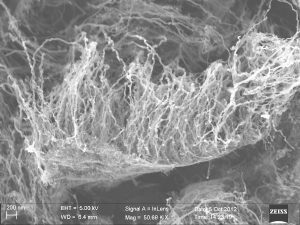 Rice University and the Honda Research Institute use single-layer graphene to grow forests of nanotubes on virtually anything. The image shows freestanding carbon nanotubes on graphene that has been lifted off of a quartz substrate. One hybrid material created by the labs combines three allotropes of carbon – graphene, nanotubes and diamond – into a superior material for thermal management. Image: Honda Research Institute.

What may be the ultimate heat sink is only possible because of yet another astounding capability of graphene. The one-atom-thick form of carbon can act as a go-between that allows vertically aligned carbon nanotubes to grow on nearly anything.

That includes diamonds. A diamond film/graphene/nanotube structure was one result of new research carried out by scientists at Rice University and the Honda Research Institute USA, reported in Nature’s online journal Scientific Reports.

The heart of the research is the revelation that when graphene is used as a middleman, surfaces considered unusable as substrates for carbon nanotube growth now have the potential to do so. Diamond happens to be a good example, according to Rice materials scientist Pulickel Ajayan and Honda chief scientist Avetik Harutyunyan.

Diamond conducts heat very well, five times better than copper. But its available surface area is very low. By its very nature, one-atom-thick graphene is all surface area. The same could be said of carbon nanotubes, which are basically rolled-up tubes of graphene. A vertically aligned forest of carbon nanotubes grown on diamond would disperse heat like a traditional heat sink, but with millions of fins. Such an ultrathin array could save space in small microprocessor-based devices.

“Further work along these lines could produce such structures as patterned nanotube arrays on diamond that could be utilized in electronic devices,” Ajayan said. Graphene and metallic nanotubes are also highly conductive; in combination with metallic substrates, they may also have uses in advanced electronics, he said.

To test their ideas, the Honda team grew various types of graphene on copper foil by standard chemical vapor deposition. They then transferred the tiny graphene sheets to diamond, quartz and other metals for further study by the Rice team.

Ajayan thinks the extreme thinness of graphene does the trick. In a previous study, the Rice lab found graphene shows materials coated with graphene can get wet, but the graphene provides protection against oxidation. “That might be one of the big things about graphene, that you can have a noninvasive coating that keeps the property of the substrate but adds value,” he said. “Here it allows the catalytic activity but stops the catalyst from aggregating.”

Testing found that the graphene layer remains intact between the nanotube forest and the diamond or other substrate. On a metallic substrate like copper, the entire hybrid is highly conductive.