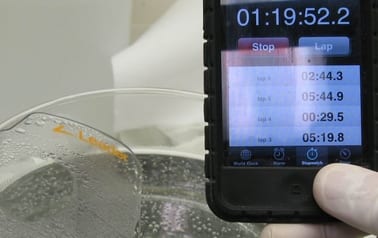 After one hour and 19 minutes, there is no fog on the area of the visor where VitreOx has been applied.

Early-stage nanotech company SiO2 Nanotech has begun beta testing commercial applications of its anti-fogging technology for corporate partners. The new technology, which was developed from patented research conducted in the lab of Nicole Herbots, professor emerita in the ASU Department of Physics, can be used on a variety of different surfaces, including glass and plastics.

SiO2 Nanotech is part of the first cohort of the Furnace Technology Transfer Accelerator, an innovative startup accelerator designed to form, incubate and launch new companies created from intellectual property and patents developed at universities and research institutions. The Arizona-based startup’s objective is to integrate its patented nanotechnologies into specific manufacturing or fabrication lines.

One of the company’s nanotechnologies, a proprietary anti-fogging technology called VitreOx, controls the fogging that occurs on surfaces as a result of condensation. Although the technology was originally developed to eliminate fogging on intraocular lenses during eye surgery, the company is now developing beta products that integrate the technology for a number of corporate partners in a variety of industries.

“Our focus right now is to finalize a number of beta products for our corporate clients,” said CEO and co-founder Clarizza Watson. “We are very excited about our products and are looking forward to commercialization.”

The fog-control technology has drawn interest from corporate clients because of the patented method for manipulating moisture on surfaces to maintain a clear field of vision. The technology controls the behavior of water droplets by forming a 2-D layer on a surface, resulting in a clear field of vision. Initial tests have shown the treatment lasts not just hours or days but for the life of the product on select surfaces.

Currently commercialization development for SiO2 Nanotech includes the areas of vision protection for athletes in sports such as football, scuba diving, skiing and snowboarding as well as the eyewear and automotive sectors. This application of VitreOx, called VitreSport, will be the initial focus of commercialization until FDA approval is achieved for the medical application. Other potential market verticals include vision safety gear for occupations such as construction and laboratory work.