Interfacial miniemulsion polymerization is a facile route for the synthesis of nanoparticles for applications ranging from therapeutics to coatings. 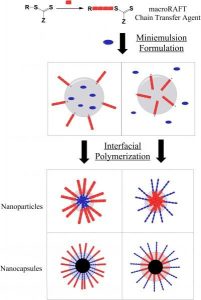 Interfacial miniemulsion polymerization has recently seen a quick development. It has been shown to be a facile and robust route to synthesize polymeric nanocapsules and hollow nanoparticles for different applications, ranging from therapeutics and stimuli-responsive release to coatings.

Polymers are directly grown from a liquid-liquid interface in a defined, controllable way. Through the combination of the distinct droplet size and shape afforded from a miniemulsion polymerization technique, with the ability to precisely control the growth of polymers via reversible addition-fragmentation chain-transfer (RAFT) polymerisation, it is now possible to direct the growth of polymers away from a liquid-liquid (droplet) interface.

Polymerization from an interface hinges on confining the growing polymer to the periphery of the miniemulsion droplet. Thus, the nanocapsule or nanoparticle wall is built-up as polymerization proceeds affording a range of particle architectures. Since miniemulsion polymerization techniques conserve droplet size and number throughout polymerization, these initial properties can be translated to the final polymeric particle. Further, it is necessary to design a chain-transfer agent so polymerization is anchored at the interface and subsequent chain growth is directed either into, or out of the droplet.

Adrian Fuchs and Kristofer Thurecht summarize the up-to-date status of this exciting field. They highlight the investigations and the challenges faced in performing RAFT polymerization in a miniemulsion, the conditions required to create polymeric architectures, and the applications of these systems.