Nanoparticles on a Drug Delivery Mission

To design nanoproducts with improved therapeutic efficiency and controlled toxicity, we need to understand the mechanisms of cellular uptake and exocytosis of nanoparticles. 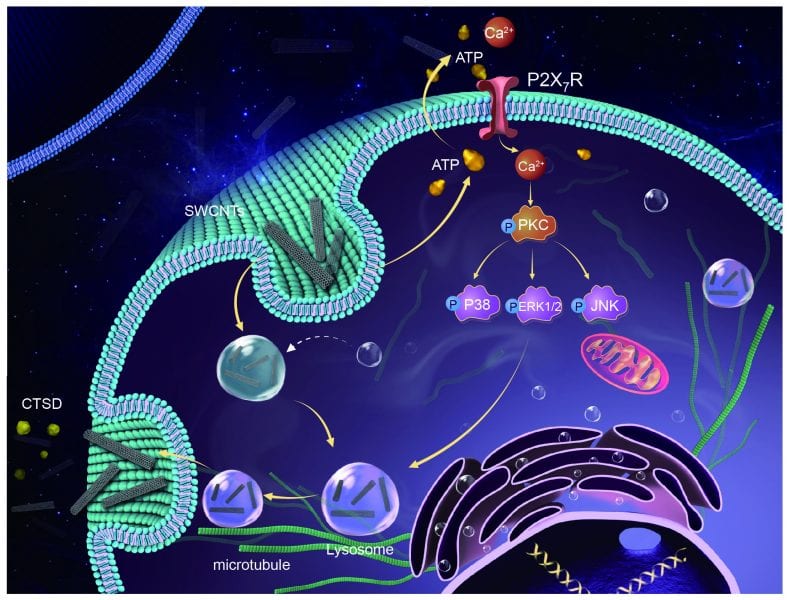 Nanoparticles are undergoing extensive exploration for targeted drug delivery. Currently, nanocarriers often suffer from low efficacy and cause side effects to healthy tissues. The uptake and removal of nanoparticles dictate their internal concentration inside cells and thus the efficacy and toxicity of these nanoparticles. For a better design of nanoproducts with improved therapeutic efficiency and controlled toxicity, it is necessary to understand in-depth the mechanisms of cellular uptake and exocytosis of nanoparticles. Much effort from researchers in the field of nanomedicine has been undertaken to enhance the uptake of nanocarriers by cells. However, little is known on the underlying mechanism for how cells repel nanoparticles.

Recently, Prof. Liang-Hong Guo’s group of the Research Center for Eco-environmental Sciences, Chinese Academy of Sciences, by using single-walled carbon nanotubes as an example, revealed that the removal of SWCNTs by macrophage cells is driven by an ATP-responsive receptor seen on cell membrane, P2X7R. Their work was inspired by careful observation of the lysosomal distribution of SWCNTs after entering cells and subsequent accumulation of ATP outside cells.

They focused on lysosomal secretion pathway as a potential mechanism for the cells to repel SWCNTs. They found that P2X7R was excited by SWCNTs and thereafter this receptor phosphorylates proteins of several signaling pathways, resulting in decreased acidity of lysosomes and re-organization of microtubules, a component of cytoskeleton, to provide orbit for the movement of those SWCNT-containing lysosomes to outside of cells. After taking out the P2X7R from cells through small interfering RNA techniques, the secretion of SWCNTs was significantly lower than it would be in normal cells.

In addition, by using activator or inhibitor of P2X7R, they showed an efficient way to decrease or increase the amount of SWCNTs inside cells, making it potentially useful for controlling the drug delivery efficacy and toxicity of nanocarriers.

Since P2X7R activation also induces the secretion of IL-1β, a cytokine responsible for inflammation, their findings highlight the risk and suggest caution on controlling inflammation simply by inhibiting P2X7R.