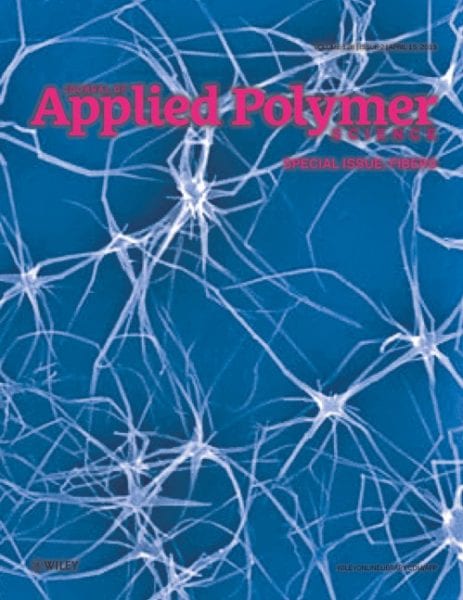 Rigid aromatic polymers have been shown to give high performance in industrial applications that require demanding operating conditions.

In newly published research, Kunio Kimura and colleagues report that the morphology of poly(p-oxybenzoyl) precipitates formed by the co-polymerisation of 4-acetoxybenzoic acid with trifunctional co-monomers based on 3,5-diacetoxybenzoic acid (DABA) is significantly influenced by the structure of the co-monomer and the solvent.  As part of their research the authors varied the co-monomer, solvent, co-polymer ratio, temperature of polymerisation, and concentration.  The multitude of conditions gives rise to fibrils, needles, spheres, spheres with needle-like structures on the surface, and nanofibre networks. The article will be highlighted on the cover of the forthcoming special issue on fibres of the Journal of Applied Polymer Science.

Nanofibre networks are widely investigated because of their potential to be used for protective clothing, high performance filters, and as high-strength fillers for polymer composites.  Many nanofibre networks are fabricated by electrospinning; however, the nature of rigid-rod polymer structures means they are often not soluble in solvents required for this process.  Here the researchers used the alternative method of reaction-induced phase separation during isothermal solution polymerisation.  This technique circumvents the problem of insolubility because the morphology is created by the phase-separation of the oligomers.

Of the co-monomers used, only polymerisation with DABA itself produces nanofibre networks. These interconnected structures resemble non-woven fabrics prepared by more conventional methods. Alternative polymerisation conditions instead produce differently shaped precipitates, such as the jellyfish-like aggregates shown below.

The study provides important insight into nanofibre network formation.  This, combined with the excellent thermal stability and the ability to control the structure of the nanofibre networks, should prove valuable for non-woven fabric applications.