Nanoescapology: Progress toward Understanding the Endosomal Escape of Polymeric Nanoparticles

An introduction to the mechanisms governing internalization and trafficking in cells; and a discussion of methods to detect endosomal escape and recent advances in controlling endosomal escape from polymer- and lipid-based nanoparticles are presented in this recent Review. 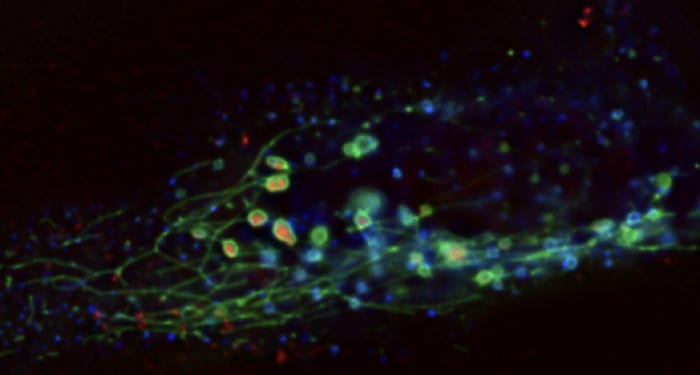 Originally heralded as a “magic bullet” for the treatment of many serious diseases, nanoparticles are yet to fully live up to their potential. Nanoparticles promise better efficacy and reduced side effects compared to traditional methods of drug delivery; however numerous obstacles exist inside the body that stand between the nanoparticle and its final destination. One of the most challenging roadblocks is trafficking of the nanoparticle within the cell. Cells take up nanoparticles through the process of endocytosis. The outer membrane envelopes the contents of the cell’s external environment before breaking away from the surface and traveling inwards in membrane-covered packages known as endosomes. To be effective as delivery systems, nanoparticles must escape these compartments to deliver their drug cargo to where it is most active, such as the cytosol or nucleus. This critical step known as “endosomal escape” is proving difficult to overcome for materials scientists.

A Review article published recently in WIREs Nanomedicine and Nanobiotechnology by Laura Selby and colleagues from Monash University and the University of Melbourne proposes the lack of progress in overcoming this bottleneck is due to the poor understanding of the “endosomal escape” mechanisms that can be exploited by nanoparticles. Many of the mechanisms put forward are still heavily debated, such as the highly cited “proton sponge effect”. The authors review the techniques currently used to investigate “endosomal escape” and highlight the shortage of approaches that quantitate escape efficiency rather than only indicate if it has occurred. Significant potential lies in the development of sensors to improve quantification of escape properties. Progress on achieving reliable and efficient endosomal escape is being made as emphasized by the success of the nanoparticle systems discussed in the review, but there is still a long way to go before nanoparticles achieve “magic bullet” status.