Nanoengineering boosts semiconducting material's ability to convert heat into power by 200 percent and its electrical conductivity by 43 percent. 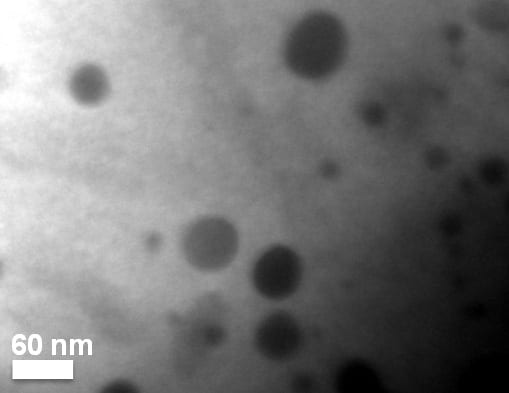 The dark spots show quantum dots within a thermoelectric material. University of Michigan researchers devised a way to increase the heat-to-energy conversion by 200 percent and the electrical conductivity of their material by 43 percent. Thermoelectric materials can convert waste heat to electricity. Image: Pierre Ferdinand P. Poudeu.

High-performance thermoelectric materials that convert waste heat to electricity could one day be a source of more sustainable power. But they need to be a lot more efficient before they could be effective on a broad scale in places like power plants or military bases, researchers say.

A University of Michigan researcher has taken a step toward that goal. By engineering a semiconducting material at the level of its individual atoms, Pierre Ferdinand P. Poudeu, assistant professor of materials science and engineering, has boosted its ability to convert heat into power by 200 percent and its electrical conductivity by 43 percent. That’s an important combination. Improving both of these figures at the same time is a major challenge for researchers working in the field.

The material Poudeu used is an alloy of titanium, zirconium, nickel and tin. While it’s not a particularly effective thermoelectric material at this point, Poudeu says it made a good testbed.

“This concept is new and exciting,” Poudeu said. “We think it can be adapted to other materials as well and pave the way for improved thermoelectric materials intended for high-performance energy conversion applications.

“If we want to build generators that convert waste heat to electricity and that are capable of replacing current technology, thermoelectric materials with much higher efficiency need to be discovered. We’ll have to about double the efficiency typically achieved today.”

Poudeu says his nano-engineering approach could achieve those gains if it can be used in current leading candidate thermoelectric materials systems.

His strategy differs from common chemical-based techniques such as doping, in which researchers add impurities to a host material to alter its electronic properties and make it more conductive. In thermoelectric materials, doping can work against itself, however, because the impurities can hamper the heat-to-electricity conversion.

Rather than add impurities, which are typically foreign chemical elements, Poudeu introduced additional individual atoms of nickel—one of the elements already in the material. The nickel atoms found their way into the crystal structure of the host material and filled out a small fraction of its vacant atomic sites. They formed what Poudeu describes as quantum dots—nanoscale structures that follow the laws of quantum, rather than classical, physics.

The structures are so small, you’d need to line up a million just to be able to see them without a microscope, Poudeu says.

The quantum dots act as traps, blocking low-energy electrons from reducing the conversion efficiency, while creating a pathway for higher energy electrons to pass through as electric current. The addition of the quantum dots into a bulk semiconductor results in a new material with a distinct electronic structure, Poudeu says.