A team of scientists have designed and fabricated nanoscale devices for energy-efficient electronics. 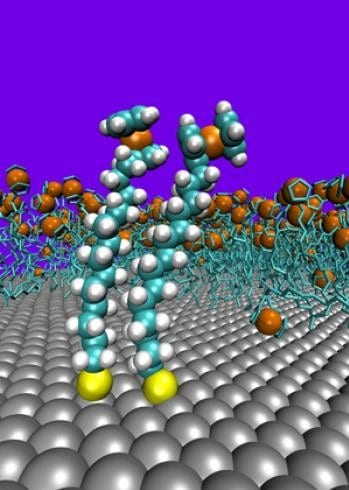 A team of scientists from Tyndall National Institute at University College Cork and the National University of Singapore have designed and fabricated ultrasmall devices for energy-efficient electronics. By finding out how molecules behave in these devices, a ten-fold increase in switching efficiency was obtained by changing just one carbon atom. These devices could provide new ways to combat overheating in mobile phones and laptops, and could also aid in electrical stimulation of tissue repair for wound healing.

The breakthrough creation of molecular devices with highly controllable electrical properties appears in Nature Nanotechnology. Damien Thompson at the Tyndall National Institute, UCC, and a team of researchers at the National University of Singapore led by Chris Nijhuis designed and created the devices, which are based on molecules acting as electrical valves, or diode rectifiers.

Thompson explains, “These molecules are very useful because they allow current to flow through them when switched ON and block current flow when switched OFF. The results of the study show that simply adding one extra carbon is sufficient to improve the device performance by more than a factor of ten. We are following up lots of new ideas based on these results, and we hope ultimately to create a range of new components for electronic devices.”

Thompson’s atom-level computer simulations showed how molecules with an odd number of carbon atoms stand straighter than molecules with an even number of carbon atoms. This allows them to pack together more closely. Tightly packed assemblies of these molecules were formed on metal electrode surfaces by the Nijhuis group in Singapore and were found to be remarkably free of defects. These high-quality devices can suppress leakage currents and so operate efficiently and reliably. The device can be cleanly switched on and off purely on the basis of the charge and shape of the molecules, just like in the biological nanomachines that regulate photosynthesis, cell division and tissue growth.

A key enabling feature for nanoscale electronics will be the ability to use molecules as rectifiers and switches. By demonstrating the rational design of molecules that rectify current with a large and highly reproducible on/off ratio, the study provides a key advance towards the creation of technologically viable ultrasmall device components. Fifty thousand of the rectifier molecules strung end to end would fit across the diameter of a human hair. Advances in computing, synthesis, and characterization means scientists can now understand and control material at the scale of atoms and molecules.

The study was funded on the Irish side by a Science Foundation Ireland Starting Investigator award to Thompson. The computer simulations were performed on Science Foundation Ireland-supported computing clusters at Tyndall and at the Irish Centre for High End Computing. The combined experiments and simulations show for the first time that minute improvements in molecule orientation and packing trigger changes in van der Waals forces that are sufficiently large to dramatically improve the performance of electronic devices.

Thompson explains, “These van der Waals forces are the weakest of all intermolecular forces and only become significant when summed over large areas. Hence, up until now, the majority of research into ultra-small devices has used stronger “pi-pi” interactions to stick molecules together, and has ignored the much weaker, but ubiquitous, van der Waals interactions. The present study shows how van der Waals effects, which are present in every conceivable molecular scale device, can be tuned to optimize the performance of the device.”

The devices are based on molecules that act as diodes by allowing current to pass through them when operated at forward bias and blocking current when the bias is reversed. Molecular rectifiers were first proposed back in 1974, and advances in scientific computing have allowed molecular‐level design to be used over the past decade to develop new organic materials that provide better electrical responses. However, the relative importance of the interactions between the molecules, the nature of the molecule-metal contact and the influence of environmental effects have been questioned.

This new research demonstrates that dramatic improvements in device performance may be achieved by controlling the van der Waals forces that pack the molecules together. Simply changing the number of carbon atoms by one provides significantly more stable and more reproducible devices that exhibit an order of magnitude improvement in on/off ratio. The research findings demonstrate the feasibility of boosting device performances by creating tighter seals between molecules.

“The development of molecular scale electronics is heavily reliant on simulation and high performance computing,” comments Greer. “The continued support for research infrastructure in Ireland allows for the scientific advances that lead to enhanced interaction with global industry leaders, and positions Ireland to be a key provider of research with impact.”