A novel sputtering deposition process for MgF2 thin films has been discovered by combining two chemical reactions on a pure Mg target with two reactive gases. 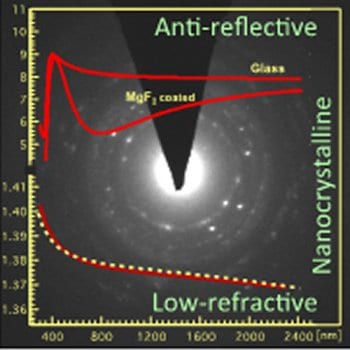 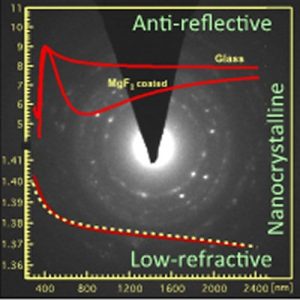 Magnesium fluoride (MgF2) thin films are of special interest for optical and solar applications due to their outstanding optical properties: non-absorbing over a wide wavelength range from 120nm to 8μm, and a very-low refraction index (n=1.38 at 550nm), which is the lowest among inorganic dense coating materials. Once available for large-area deposition techniques, it can be used as anti-reflective coatings for photovoltaic solar cells and glazing. Deposition techniques investigated so far suffer from the use of the toxic and very corrosive gas F2, bad uniformity, or unachievable stoichiometry leading to absorption.

Stefan Mertin and his co-workers from the EPFL (Ecole Politechnique Fédéral de Lausanne), Switzerland, and from the University of Basel, Switzerland, discovered a novel sputtering deposition process for MgF2 thin films by combining two chemical reactions on a pure Mg target with two reactive gases, oxygen (O2) and carbon tetrafluoride (CF4), diluted with argon. CF4 is a passive, non-toxic gas as long as it does not interact with the plasma. The researchers analyzed the chemical species produced in the plasma by in situ mass spectrometry, and discussed the possible reaction path. They could prove that the postulated reaction 2Mg + CF4 + O2 -> 2MgF2 + CO2 indeed took place. The obtained films exhibit a high content of stoichiometric MgF2 and low level of impurity, as revealed by in situ X-ray photoelectron spectroscopy (XPS).

The grown nanocrystalline films are highly transparent in the whole solar spectral range (300–2500nm) and exhibit a very-low refractive index of 1.382 at 550nm, which is congruent to the theoretical value of 1.383 for polycrystalline MgF2. A quarter-wave thick film on glass reduces light reflection of a surface—when coated—from 4% to 1%, in other words by 3%. The presented results are very promising towards large-area coatings of MgF2 because the proposed magnetron sputtering process is up scalable to large-size (3.21×6m2) glass substrates in industrial production.

Liquid-Metal-Driven Micromachines for the Next Cutting-edge Technology
Stretchable, Morphing Smart Skins Inspired by Cephalopods
A Powerful Lightweight Battery Comes Closer to Reality
Rapidly detecting sepsis at the point of care