Nanochemistry – When It Rains It Pores

Professor Geoffrey Ozin from the University of Toronto reviews porous materials—how the research goals have varied over the years, where we are today, and what these materials may offer in the future. 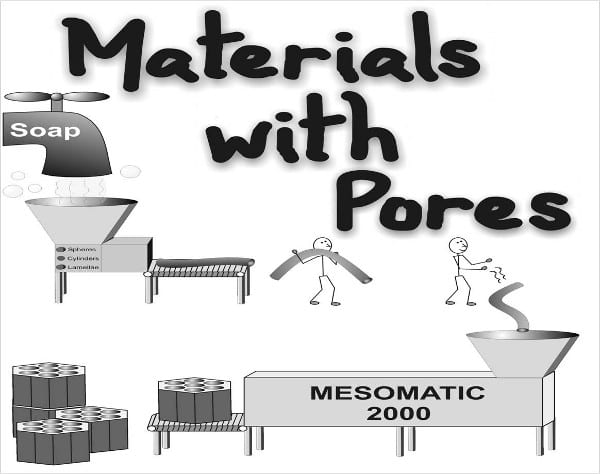 Welcome to one of our guest columns, where active researchers can share their views on topics relevant to materials science. Professor Geoffrey Ozin from the University of Toronto shares his thoughts on porous materials.

Have you ever paused to think whether there are more materials being reported these days filled with regular arrays of holes than materials with close-packed lattices?

Not so long ago it was thought that thermodynamics would dictate how atoms, molecules and clusters would pack in the lattice of crystals to minimize the occurrence of energetically unfavourable open space. With the discovery more than half a century ago of large families of naturally occurring and synthetic zeolites with crystalline microporosity, this view soon changed and was replaced by the realization that kinetic stability can dominate over thermodynamic stability with respect to pore collapse. The trick to creating voids in nominally dense materials was to find a synthetic pathway to metastable phases with chemically and mechanically robust open frameworks.

In this context, research conducted over fifty years ago aimed at understanding the mode of formation of zeolites led to the concept of templating in which a structure-directing, space-filling and charge-balancing, hydrated inorganic or organic cation, was used as a template for the co-assembly of tetrahedral silicate and aluminate building blocks, causing them to organize and polymerize around it and leading to porosity after its subsequent removal.

Sounds simple enough but the mechanistic details of zeolite self-assembly are still not fully understood and research into it continues to this day.

It is worth mentioning at this point the recommended nomenclature for porous materials, from the International Union of Pure and Applied Chemistry (IUPAC), that micropores have free diameters less than 2 nm and mesopores are in the range of 2–50 nm while 50 nm and above are macropores.

Knowledge of how to introduce voids into solids ignited an intense global effort aimed at understanding the rules of zeolite templating in order to gain control over the structure of the crystalline microporous framework, the pore size and shape and the silicon–aluminum ratio, which determined the ion-exchange capacity and the acidity or basicity of the pore surfaces; properties that enabled a range of applications like molecule size and shape selective catalysis, gas separation, humidity control, sequestration and storage of radioactive waste, heat pumps working on adsorption–desorption cycles, and replacement of environmentally unfriendly phosphate water softeners in detergents with “green” zeolite ion-exchange substitutes.

At the time this was celebrated as a great breakthrough and enormously expanded opportunities for microporous materials not only in traditional areas like catalysis and separation but also for advanced technologies that could benefit from holey materials with large internal surface areas and voluminous pore spaces: chemical sensors, solar cells, fuel cells and batteries, controlled chemical storage and release vehicles, and nanoreactors for host–guest inclusion dubbed “ship-in-the-bottle” chemistry. The latter avenue notably provided a structurally well-defined confining space for the nucleation and growth and stabilization of quantum size effect mediated, brightly luminescent semiconductor nanocrystals and plasmonic metal nanocrystals.

Early research aimed at the synthesis of semiconductor and metal nanocrystals within the nanometre voids of zeolites and molecular sieves inspired analogous studies of arrested nucleation and growth of nanocrystals in solvents that were also ligands, where in the case of zeolites the capping ligand was the zeolite cage.

Research that was beginning to stretch the traditional boundaries of zeolite and molecular sieve materials science raised the possibility that crystalline microporous metal chalcogenides might be accessible. The rules developed for templating turned out to work quite well when applied to metal sulfide building blocks and this research revealed a whole new world of porous metal sulfide semiconductors. The pioneering archetypes were made of tin and germanium sulfides with impressive open-framework structures. Some of these materials displayed flexibility of their open-frameworks with respect to the adsorption and desorption of molecular guests, and some were reported as seasonal because their structures changed depending on relative humidity.

So the holey genie was out of the bottle and soon thereafter it proved possible to make crystalline microporous metal selenide analogues, and the first example of electronic bandgap engineering—traditionally applied to bulk semiconductors—applied to these materials was demonstrated by the synthesis of crystalline microporous thioselenides and their verified composition-tuneable properties. This led to the possibility of building molecule-discriminating electronic and optical devices out of microporous semiconductors, and an early example of an electronic nose was demonstrated.

The discovery of coordination frameworks nowadays considered synonymous with metal organic frameworks (MOFs) was inspired by earlier work on crystalline microporous metal oxides and metal sulfides. In these holey materials, metal ions or metal ion clusters are linked together through organic ligands, the choice of which controls the size, shape and dimensionality of the pores and their gas adsorption–desorption behaviour.

The surprisingly large pore surface areas of coordination frameworks, some able to withstand pore collapse on removing imbibed solvent and/or template, have turned out to be especially pertinent with respect to a number of environmental problems facing our planet today, such as the challenge of safe storage of large amounts of H2 under practical temperature and pressure conditions for clean power generation and the greenhouse gas conundrum that requires the sequestration of large quantities of CO2 from our atmosphere to prevent further global warming.

Half a century of research on the synthesis of a periodic table of crystalline microporous materials created the impression that pore sizes above the 2 nm limit in this class of materials would be impossible.

The above doctrine proved to be wrong with the discovery that periodic mesoporous silicas (PMS) and periodic mesoporous organosilicas (PMO) with pore sizes in the 2–50 nm range could be synthesized using supramolecular templates comprising surfactant or block copolymer micelle or liquid crystal assemblies, rather than having to synthesize larger and larger organic molecule templates to direct the formation of pores bigger than 2 nm.

This breakthrough led to intense global research activity on a periodic table of mesoporous materials, to accompany the microporous materials which had been studied for over five decades. This discovery provided new opportunities for materials scientists as a great many solid state materials that had been engineered into advanced technologies were now accessible in mesoporous form. As a result, research and development began in earnest to discover whether this new cl
ass
of materials filled with regular arrays of mesoscale channels and pores could improve the performance of existing products or facilitate the development of new products in application areas, including electrodes and electrolytes for fuel cells, photovoltaics and batteries, photocatalysts, low-dielectric-constant films for smaller, more powerful microelectronics, more efficient antireflection coatings in optics, efficacious chromatography stationary phases, drug delivery and drug removal vehicles in medicine, and pesticide/herbicide release platforms in agriculture.

Pore control was taken to even greater precision with the realization that crystal lattices of self-assembled micron-scale silica and polymer spheres, called opals, could also be used as templates for replicating inorganic materials. One of the first major breakthroughs for these kinds of periodic macroporous materials involved inversion of an opal template in silicon to create the world’s first three-dimensional silicon photonic-bandgap material, potentially useful for controlling light in all three spatial dimensions. Research of this genre established opal optical materials not just as photonic platforms for controlling light (e.g., guiding, switching, localizing and amplifying photons at submicron length scales) but notably through Bragg diffraction also for the creation of structural color with myriad uses from electrically tuneable reflective full-color displays to effective authentication technology to color sensors.

So where will we see the next downpour? One thing that struck me as truly unexpected was the very recent report that a chiral nematic liquid crystal composed of cellulose nanocrystals can function as a soft template to cast a hard replica in silica. And free-standing films of this material devoid of template were shown to behave as chiral photonic crystals. As a result of this astonishing discovery we can expect to see light-scale chiral porous silicas explored for chiral separations of biological molecules and as hard templates for double inversions of myriad replica materials with imprinted photonic chirality.

All of these materials filled with regular porosity over multiple length scales, from nanometres to microns are enough to make one pause for thought and ponder the old adage: when it rains, it pores!

The image above first appeared in Nanochemistry, A Chemical Approach to Nanomaterials, by G. A Ozin, A. C. Arsenault, and L. Cademartiri, 2008, Royal Society of Chemistry.