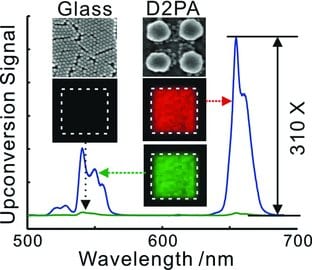 Materials capable of converting low-light invisible infrared photons into visible ones with a high upconversion efficiency have many significant applications, and have long been pursued by scientists and engineers. Currently, the most promising candidates for such conversion are upconversion luminescence materials made of crystalline matrices doped with lanthanide ions, which generate visible light with an intensity that is orders of magnitude lower than what needed in second harmonic generation (SHG) while offering far higher efficiency than SHG. However, for many applications, this efficiency is still not high enough.

Recently, Prof. Stephen Chou and his team at Princeton reported a breakthrough in making high efficiency nanostructure-enhanced lanthanide-based upconversion luminescence materials. Using a new novel nanostructure they invented, called “disk-coupled-dots on pillar array” (D2PA), they achieved a 300x enhancement in the conversion efficiency. This large enhancement is more than one order of magnitude better than other enhancement methods previously reported and uniform over large area, making this new technique very useful for various applications, such as display, biosensing, and solar energy. Furthermore, the D2PA had demonstrated huge enhancements in surface enhanced Raman scattering (SERS), fluorescence, and immunoassays that are orders of magnitude higher than previous work.

The paper, “Large Enhancement of Upconversion Luminescence of NaYF4:Yb3+/Er3+ Nanocrystal by 3D Plasmonic Nano-Antennas”, is free to download for a limited time.