New nanostructures can store precise amounts of other materials and hold promise for new drug-delivery technologies. 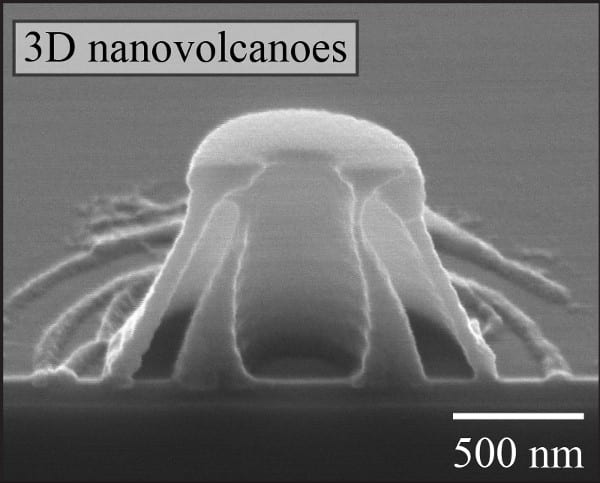 Researchers from North Carolina State University have developed a method for creating “nano-volcanoes” by shining various colors of light through a nanoscale “crystal ball” made of a synthetic polymer. These nano-volcanoes can store precise amounts of other materials and hold promise for new drug-delivery technologies.

The researchers create the nano-volcanoes by placing spherical, transparent polymer nanoparticles directly onto the flat surface of a thin film. They then shine ultraviolet light through the transparent sphere, which scatters the light and creates a pattern on the thin film. The thin film is made of a photoreactive material that undergoes a chemical change wherever it has been struck by the light. The researchers then submerge the thin film in a liquid solution that washes away the parts of the film that were exposed to light. The material that remains is shaped like a nanoscale volcano.

“We can control the pattern of light by changing the diameter of the nanoparticle spheres, or by changing the wavelength – or color – of the light that we shine through the spheres,” says Xu Zhang, a doctoral student in mechanical and aerospace engineering at NC State and lead author of a paper describing the work. “That means we can control the shape and geometry of these structures, such as how big the cavity of the nano-volcano will be.”

The researchers developed a highly accurate computer model that predicts the shape and dimensions of the nano-volcanoes based on the diameter of the nanoscale sphere and the wavelength of light.

“The materials used in this process are relatively inexpensive, and the process can be easily scaled up,” says Dr. Chih-Hao Chang, an assistant professor of mechanical and aerospace engineering at NC State and co-author of the paper. “In addition, we can produce the nano-volcanoes in a uniformly patterned array, which may also be useful for controlling drug delivery.”

Chang’s team is now working to improve its understanding of the release rate from the nano-volcanoes, such as how quickly nanoparticles of different sizes will “escape” from nano-volcanoes with different-sized mouths. “That’s essential information for drug-delivery applications,” Chang says.

“It’s exciting to take our understanding of how light scatters by particles and apply it to nanolithography in order to come up with something that could actually help people.”