Nano-architecting is one design strategy to create lightweight materials that can withstand the harsh conditions in radiation-intensive applications, such as space. By nano-architecting, a key dimension of a structure is kept at the nanoscale without limiting the overall size of the structure, for example a large lattice composed of beams with beam wall thicknesses on the nano-scale. The nano aspect is key for exploiting certain beneficial material and mechanical properties that only come about when dimensions are reduced to the nano-scale.

In an effort to exploit both these effects, Julia Greer and co-workers from Caltech fabricated metallic glass nano-lattices and irradiated them.

These 3D metallic glass nano-lattices are composed of hollow beams of sputtered metallic glass with beam wall thicknesses ≈10–100 nm and are 20 times lighter than their bulk-level counterparts.

Enhanced deformability upon irradiation was apparent from the nanolattices’ accommodation of larger strains before any kind of failure, as well as the presence of smaller strain bursts and stress drops throughout the compression experiments. 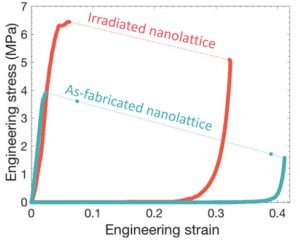