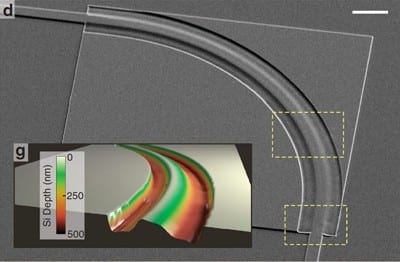 Light has become one of our most powerful servants, carrying information ranging from a chat room lol to an entire digitized movie through hundreds of miles of fiber optics in seconds. But like many servants, light is sometimes uncooperative. Among other things, it doesn’t like to go around tight corners. Cornell and Massachusetts Institute of Technology researchers have a solution that could offer increased bandwidth for fiber-optic communication, both in long-haul transmission and in the dense traffic in large data centers.

“We are tricking the light into thinking it’s going in a straight line,” explained Michal Lipson, associate professor of electrical and computer engineering.

The trick is an irregularly shaped waveguide designed in a collaboration between Lipson’s research group and MIT mathematician Steven Johnson’s. They reported their work in the Nov. 20 issue of the journal Nature Communications. Lucas Gabrielli, a recently graduated Ph.D. student in Lipson’s group, is first author.

To process the signals coming out of fiber-optic networks, engineers are increasingly turning to “photonic” circuits, where light beams flitting through nanometer-scale waveguides on a silicon chip replace electrons in metal wires. With photonic chips there’s no need to convert light signals into electric currents for processing and then back again to retransmit. But it all has to fit on that little chip, and that means the waveguides have to turn corners. Right angles can be replaced with curves; that works with the fundamental wavelength of a light beam, but not always with its higher order modes, or harmonics.

Pluck a guitar string and it vibrates over its entire length, like a jump rope swinging up and down. But other, higher vibrations are superimposed on that fundamental one, which is what makes a guitar sound different from a cello or a piano. Light waves likewise have higher modes of vibration, and these could be harnessed for communication, Lipson said, with several modes of a single light beam each carrying a different signal, vastly increasing the amount of information that can be transmitted. But when light waves are confined to a narrow waveguide the several modes may interfere with one another — especially when going around narrow bends on a tiny chip.

To correct for this the researchers used a mathematical technique called transformation optics that shows how the path of electromagnetic waves changes when moved from one coordinate system to another — same path, a different way of drawing a picture of it. Think of the Mercator projection that moves the shape of continents from the surface of a globe to a flat map.

From the shape of a map that makes a straight line fit into a curve, the researchers calculated how the index of refraction of a waveguide would need to vary across the cross-section of the guide to in effect create a separate channel for each of several modes of a single light beam. Varying the depth of the channel controls the index of refraction.

Lipson and Gabrielli fabricated a chip based on that design at the Cornell Nanoscale Facility, using a technique called grayscale e-beam lithography. A beam of electrons scanning across the silicon chip carves away the surface; varying the intensity of the beam varies the depth of the cut. In tests, these “multimode bends” attenuated a light beam far less than conventional rectangular waveguides curved with the same radius, indicating less coupling between modes.

It hasn’t been done yet, Lipson said, but she envisions future fiber-optic systems simultaneously transporting several beams of light at different wavelengths, each in turn carrying several different signals in different modes of vibration, along with photonic chips that can generate, read and manipulate such multiplexed signals.