Scientists at University of California, San Diego, USA, led by Joseph Wang, have put together a multisegment nanomotor that contains components responsive to magnetic and to chemical stimuli. 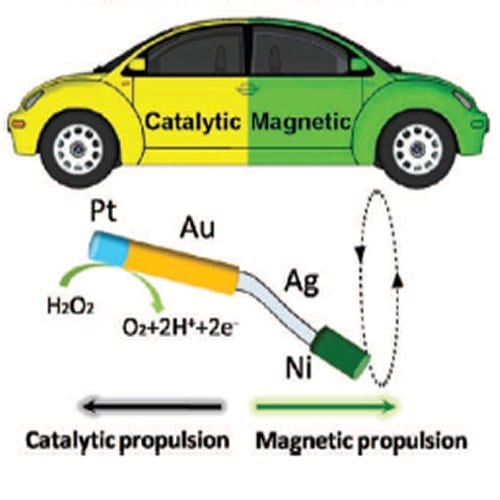 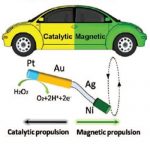 Hybrid metallic nanowires can act as nanomotors powered by both chemical fuel and magnetic movement.

Hybrid metallic nanowires act as nanomotors powered by chemical fuel and magnetic movement, in work by US scientists published in a Special Issue to celebrate the anniversary of Chad Mirkin, an eminent nanoscientist, at Northwestern University, USA.

As a child I watched with wonder, as a single injection of nanobots in Star Trek cured all internal injuries and ills of both human and machine. Though such nanobots are still firmly in the realm of science-fiction, researchers may have come one step closer to realising this concept with the development of hybrid nanomotors that can be powered by chemical fuel or magnetic locomotion, or both at once, and which can switch between the two kinds of movement depending on the environment they are in.

Chemically, electrically, and magnetically powered motors can be made using nanowires made up of different segments that receive signals, respond to stimuli, or produce movement. Generally these motors only work in one direction and make use of only one form of power; chemical fuel, electrical propulsion, or magnetic movement. Now scientists at University of California, San Diego, USA, led by Joseph Wang, have put together a multisegment nanomotor that contains components responsive to magnetic and to chemical stimuli; this means that the motor can be driven by both magnetism and fuel.

The scientists constructed the nanowire by a technique called template electrodeposition, which means that they can make nanowires consisting of many different sections and metals. One segment can respond to the presence of a chemical fuel, hydrogen peroxide, while another moves like a flipper in a magnetic field in the opposite direction. One or both of these modes of action can be switched on, by addition of the fuel and/or by use of a magnetic field. Though currently the action of both segments together actually slows down the motor, it is easy to see how the two modes of propulsion could also be used together to increase versatility and broaden the scope of manmade nanomachines.

The paper describing this work is included in a Special Issue to celebrate Chad Mirkin’s 20th anniversary at Northwestern University, USA. Mirkin’s legacy to the nano field as a whole is huge, and the Issue is filled with equally exciting reports.

Wang and his co-workers believe that such hybrid nanomotors are promising for production of self-regulated, responsive nanovehicles that can adapt and reconfigure their operation according to the environment and events; these could be important for many future applications that we can now only dream of.