A superior signal to noise ratio for heterodyne detected nonlinear optical imaging can be attained by a newly developed tuned amplifier system in a lock-in free manner, as demonstrated through stimulated Raman scattering imaging of live cells and tissues. 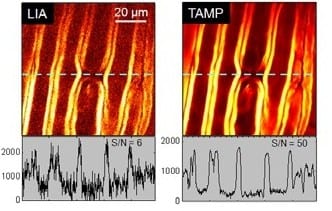 Many optical techniques in the field of life sciences require the extraction of a small AC signal at the sub-microvolt level from a noisy environment. The lock-in amplifier (LIA), invented by Robert Dicke in 1961 and known as a phase-sensitive detector, has been an essential instrument for heterodyne detected nonlinear optical microscopy. Although laser shot noise limit can be reached by MHz modulation in stimulated Raman scattering (SRS) microscopy, the signal to noise ratio (SNR) at low laser power is actually limited by the electronic noise of the LIA’s input preamplifier. Much more favorable values can be reached with a new lock-in free detection scheme. It has been designed for highly sensitive heterodyne detected nonlinear optical imaging with a focus on SRS microscopy.

The new system is called “TAMP”, short for tuned amplifier, and was developed by Ji-Xin Cheng and a team at Purdue University, West Lafayette, USA. It is compact and cost-effective – and it improves the signal to noise ratio by an order of magnitude compared to conventional lock-in detection. TAMP can be used for high-speed SRS imaging of cell culture, tissue, and pharmaceutical samples, opening up new application possibilities.

The researchers demonstrated the superior performance of the new setup through stimulated Raman scattering imaging of live cells and tissues at the speed of 2 µsec/pixel. Application of the tuned amplifier to transient absorption microscopy was also demonstrated. The increased signal to noise ratio allowed epi-detected in vivo imaging of myelin and blood in rat spinal cord with high spatial resolution.

The TAMP is composed of an LC resonant tank circuit, a low noise JFET-based preamplifier, a bandpass filter, a selectable gain amplifier, and a full wave precision rectifier. In contrast to the sophisticated LIA, the simple electronic design of the TAMP permitted to integrate all components into a single box with a small footprint and at a fraction of the cost of LIA. In addition the TAMP does not require phase-locking with the optical modulator and its performance can be optimized by adjusting one parameter, namely the amplifier gain.

The LC circuit backed up by a voltage buffer preamplifier selectively amplifies the signal at the modulation frequency by 44 dB. Next, the bandpass filter eliminates the low and high frequency noise leaking through the resonant circuit. The following amplifier with selectable gain from 19 to 58 dB further enhances the signal level in order to reach the amplitude of a few volts. Finally, the signal is rectified with the precision rectifier and then sent to the analog-to-digital converter for digitization.

The scientists hope that the simplicity of the new setup will greatly promote the commercialization of heterodyne-detected microscopy, which in turn will expedite the acceptance of SRS and pump-probe imaging among the biologists.