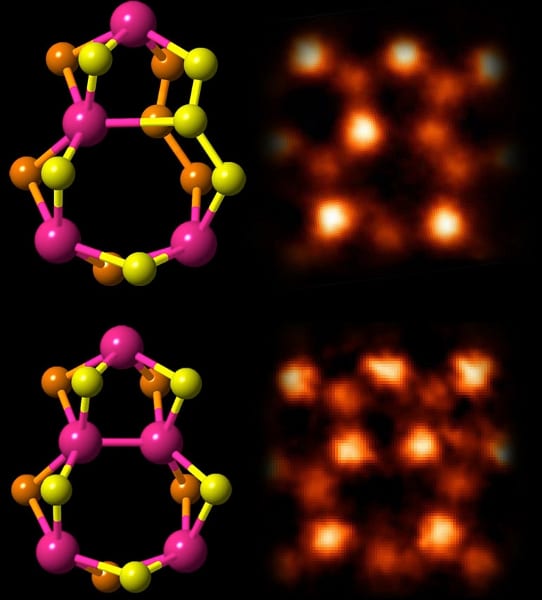 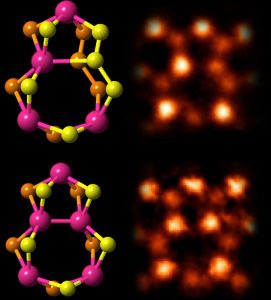 Schematics and experimental images produced by Oak Ridge National Laboratory show defects at the 60-degree grain boundaries in two-dimensional samples of molybdenum disulfide. The defects are 5- and 7-atom dislocation cores; the numbers refer to locations where the atomic arrangements veer from regular six-atom hexagons. Their presence indicates a one-dimensional conductive “wire” that runs along the boundary. In the illustration, the molybdenum atoms are cyan and the sulfur atoms are orange and yellow. Image: Oak Ridge National Laboratory

Scientists at Rice University and Oak Ridge National Laboratory (ORNL) have advanced on the goal of two-dimensional electronics with a method to control the growth of uniform atomic layers of molybdenum disulfide (MDS).

MDS, a semiconductor, is one of a trilogy of materials needed to make functioning 2-D electronic components. They may someday be the basis for the manufacture of devices so small they would be invisible to the naked eye.

The goals were to see if large, high-quality, atomically thin MDS sheets could be grown in a chemical vapor deposition (CVD) furnace and to analyze their characteristics. The hope is that MDS could be joined with graphene, which has no band gap, and hexagonal boron nitride (hBN), an insulator, to form field-effect transistors, integrated logic circuits, photodetectors and flexible optoelectronics.

“For truly atomic circuitry, this is important,” Lou said. “If we get this material to work, then we will have a set of materials to play with for complete, complicated devices.”

Last year, Lou and Ajayan revealed their success at making intricate patterns of intertwining graphene and hBN, among them the image of Rice’s owl mascot. But there was still a piece missing for the materials to be full partners in advanced electronic applications. By then, the researchers were already well into their study of MDS as a semiconducting solution.

“Two-dimensional materials have taken off,” Ajayan said. “The study of graphene prompted research into a lot of 2-D materials; molybdenum disulfide is just one of them. Essentially, we are trying to span the whole range of band gaps between graphene, which is a semimetal, and the boron nitride insulator.”

MDS is distinct from graphene and hBN because it isn’t exactly flat. Graphene and hBN are flat, with arrays of hexagons formed by their constituent atoms. But while MDS looks hexagonal when viewed from above, it is actually a stack, with a layer of molybdenum atoms between two layers of sulfur atoms.

Co-author Zheng Liu, a joint research scientist in Lou’s and Ajayan’s labs, noted the Yakobson group predicted that MDS and carbon atoms would bind. “We’re working on it,” he said. “We would like to stick graphene and MDS together (with hBN) into what would be a novel, 2-D semiconductor component.”

“The question now is how to bring all the 2-D materials together,” said co-author Sina Najmaei, a Rice graduate student. “They’re very different species and they’re being grown in very different environments.”

Until recently, growing MDS in a usable form has been difficult. The “Scotch tape” method of pulling layers from a bulk sample has been tried, but the resulting materials were inconsistent, Lou said. Early CVD experiments produced MDS with grains that were too tiny to be of use for their electrical properties.

But in the process, the researchers noticed “islands” of MDS tended to form in the furnace where defects or even pieces of dust appeared on the substrate. “The material is difficult to nucleate, unlike hBN or graphene,” Najmaei said. “We started learning that we could control that nucleation by adding artificial edges to the substrate, and now it’s growing a lot better between these structures.”

“Now we can grow grain sizes as large as 100 microns,” Lou said. That’s still only about the width of a human hair, but in the nanoscale realm, it’s big enough to work with, he said.

Once the Ajayan and Lou teams were able to grow such large MDS arrays, the ORNL team imaged the atomic structures using aberration-corrected scanning transmission electron microscopy. The atomic array can clearly be seen in the images and, more importantly, so can the defects that alter the material’s electronic properties.

“In order to improve the properties of 2-D materials, it’s important to first understand how they’re put together at a fundamental scale,” Idrobo said. “Our microscopy facility at ORNL allows us to see materials in a way they’ve never been seen before — down to the level of individual atoms.”

Yakobson, a theoretical physicist, and his team specialize in analyzing the interplay of energy at the atomic scale. With ORNL’s images in hand, they were not only able to calculate the energies of a much more complex set of defects than are found in graphene or BN but could also match their numbers to the images.

Among the Yakobson team’s interesting finds was the existence, reported last year, of conductive subnano “wires” along grain boundaries in MDS. According to their calculations, the effect only occurred when grains met at precise 60-degree angles. The ORNL electron microscopy images make it possible to view these grain boundaries directly.

The Rice researchers see many possible ways to combine the materials, not only in two-dimensional layers but also as three-dimensional stacks. “Natural crystals are made of structures bound by the van der Waals force, but they’re all of the same composition,” Lou said. “Now we have the opportunity to build 3-D crystals with different compositions.”

“These are very different materials, with different electronic properties and band gaps. Putting one on top of the other would give us a new type of material that we call van der Waals solids,” Ajayan said. “We could put them together in whatever stacking order we need, which would be an interesting new approach in materials science.