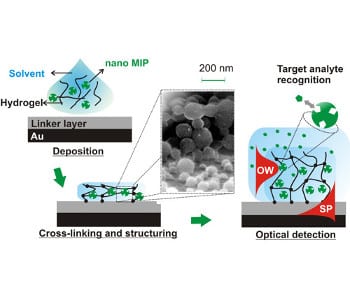 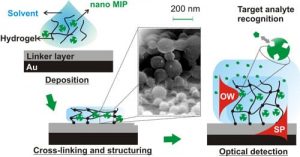 Molecularly imprinted polymers (MIPs) represent a promising alternative to biologically derived affinity materials, such as antibodies, that are established in various analytical technologies. In conjunction with optical sensors, MIPs offer attractive means for rapid, sensitive and cost effective detection of low molecular weight analytes that are important in various areas of modern society. MIPs are typically prepared from synthetic polymers and attached to the sensor surface in order to provide moieties for selective capturing of target molecules from liquid samples. Compared to biologically-derived materials, they offer the advantage of robustness and durability. Current advances in MIP synthesis showed that MIP can compete with antibodies in terms of affinity binding constants when they are prepared in form of polymer nanoparticles and affinity purified.

Researchers from Austria, Czech Republic, Germany, Greece, and Singapore jointly developed a new type of MIP-based material for optical sensors. It is based on a composite film architecture that comprises MIP nanoparticles loaded into a photo-crosslinked hydrogel polymer network. The composite film can swell in liquid environments and thus provides a highly open three-dimensional structure that can accommodate large amounts of affinity captured analyte. In addition, the composite film serves as an optical waveguide which can be utilized for extremely accurate optical probing of target analyte binding. The composite MIP film can be prepared by using simple techniques such as dip-coating, spin-coating, or injection printing and it can be structured by standard photo-lithographical means.

The optical waveguide mode spectroscopy (OWS) was implemented by using a Kretschmann configuration of attenuated total reflection method for the detection of molecular binding events in the composite film. This approach combines the advantages of large binding capacity with label-free readout method based on direct measurement of binding-induced refractive index changes. The potential of this approach is demonstrated by using well-characterized MIP nanoparticles that were imprinted with L-Boc-phenylalanine-anilide (L-BFA which is water-insoluble amino acid derivative) and trapped in synthetic poly(N-isopropylacrylamide)-based hydrogel. Good specificity of the sensor and the limit of detection of 2 µM were achieved and the analysis required only 10 minutes.

These results open a new door to the development of the next generation of MIP sensors capable of multi-analyte and reference-compensated measurements.