Exploiting the two-faced nature of Janus particles leads to research in multi-fuelled locomotion. 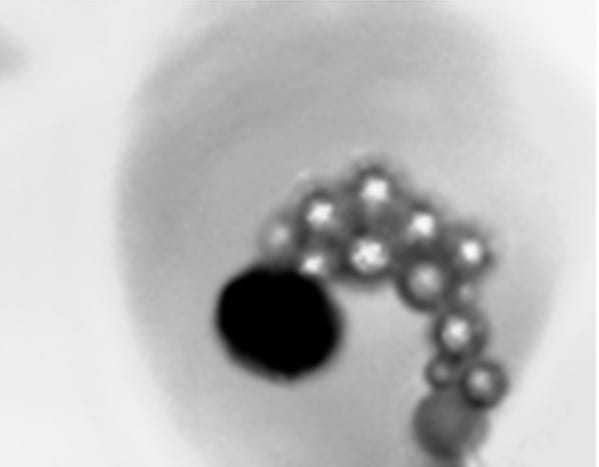 Janus particles, named after the Roman god with two opposing faces, are asymmetrical objects with distinct surface regions of different chemical or physical properties. The particular Janus particles created by this group from America are aluminium microspheres of between 5 and 30 μm in diameter that have been partially coated with palladium.

In pH 4–11, the particle’s partial palladium coating catalyses the decomposition of any hydrogen peroxide in the surrounding solution, producing water and oxygen bubbles. The evolution of oxygen generates thrust, propelling the particles forward in the direction of their uncoated aluminium segment. One limiting factor to the application of micromotors like these, however, is that the hydrogen peroxide commonly used to fuel their motion is required in high concentrations. Handy, then, that these Janus particles can run on more than one fuel type.

Under either acidic or basic conditions, the uncoated aluminium part reacts with either hydrogen or hydroxide ions, in both cases producing hydrogen bubbles, which propels the particle in the opposite direction, toward its palladium shell. A speed of 25 μm per second was achieved by these particles under basic conditions, but a higher speed yet was reached in an acid medium of the same concentration, slightly outdoing the palladium/hydrogen peroxide propulsion speed at 36 μm per second.

The call for self-propelled nano/microscale particles is very broad, echoing across such hot fields as targeted drug delivery and environmental remediation. While the ability to autonomously switch fuels in response to changes in their environment represents both an advantage and an engineering challenge—in keeping with the two-faced nature of the particles themselves—the beautiful simplicity and extraordinary versatility of these Al/Pd particles are a major advantage. Their ability to adapt chemically for self-propulsion in different media will allow their use in completely different or changing environments without modification, giving them a very competitive edge across a variety of applications.

Computational electromagnetics: Know your tools for they shape our future
A rose garden on titanium surfaces
Printing liquid metals: The next generation of wiring
How can bioinspired nanofibers regenerate skin and aid wound healing?