Researchers from EMPA, the Swiss Federal Institute for Science and Technology, present light scattering enhancement at the absorption edge in dewetting droplets of cyanine dyes. 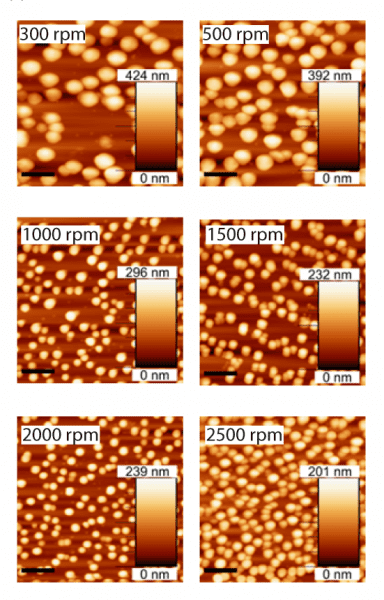 Light scattering phenomena have interested mankind for a long time as they are responsible for a large number of everyday-life visual effects such as rainbows and clouds. Light is at the core of many new technologies based on unexpected scientific findings in the field of optics. Studies of the interaction of light with micron and submicron sized particles and nanostructures aim at controlling and manipulating light. Examples are light trapping structures in photovoltaic devices or high refractive index dielectric cavities for all-optical switching. These devices are normally fabricated by semiconductor processing techniques. Less effort has been devoted to study optical effects from organic material systems. Yet organic materials possess attractive features when compared to metallic and inorganic dielectric materials. Organic chromophores show interesting intrinsic electro-optical properties that can be custom designed through chemical synthesis. Organic materials can be coated from solution using various deposition or printing methods, allowing the fabrication of large area devices. Film destabilization can be applied to organize films into self-assembled structures.

One class of organic semiconductors are the cyanine dyes, mostly known for their role as sensitizers in photographic films. Cyanine dyes show pronounced light absorption in the visible to near infrared wavelength range. Together with strong absorption bands, cyanine dyes also exhibit strong variations in their refractive index.

In a study published in Advanced Optical Materials, a group of researchers around Jakob Heier from EMPA, the Swiss Federal Institute for Science and Technology, studied the interaction of light with a film of microdroplets of a cyanine dye. Hemispheres of the dye form by self-assembly during the coating process. The process is not only very straight forward (e.g. micro droplets form during dip coating), also the dimensions of the droplets can be easily controlled by the processing conditions.

For droplets with dimensions in the range of the wavelength of light absorption, the complex interplay of scattering and absorption leads to a complex field distribution pattern with regions of high scattering field intensities. In specific cases the hemispheres effectively act as microlenses.

Microoptics is important in the miniaturization of photonic systems and important for imaging, sensing and optical interconnects.